I’ve been staying for a third working visit at my studio. The visit was special in a number of aspects:

It was lasting for the whole of three weeks.
I was to be printing the sonnet assigned to me for the #154sonnets effort of the Bodleian Library in Oxford (there will be a separate blog post covering this), and, last but not least:
I was to be staying on the 11th March. On this very day ten years ago we had to say farewell to our dog Tita. She was almost 14 years old by then. She was the master of the studio, printer’s dog and guardian of type while on transport in the van. What I was not aware of back then but have learned since: she scared the mice away.

I’ve had furry visitors ever since the summer of 2013. As far as I can say today it was three different species. The first to come, and fairly hard to catch, were house mice. They seemed to be all over the place, running over sheets hot off the press and leaving their footprints on the margins. There were three at the same time. It took me weeks to catch them and give them one by one a lift to a nice place far away from the studio’s doors.

In January 2014 a yellow-necked wood mouse somehow managed to come in. It was comparatively easy to catch. They don’t normally fancy living indoors.

Later that year shrews tried out the place. I got rid of them by the same procedure as before: catching them alive and giving them a lift to somewhere far enough away to prevent them from coming back in again.

I had traces of somebody living in one of the drawers when I was in the studio last December. I cleared all of it away. But when I came for this recent working visit, the traces had reappeard in the very same drawer. I put up the traps, but there was no catch over the whole long period I was staying. It appears there was nobody home anymore.

Shortly before I left Nottuln a cold spell was rushing in and we had some snow. It gave the town a very special flair. The blackbirds on our balcony were not all too impressed. The day of my 500 kilometer journey to my studio was dry. But the next morning I woke up to a surrounding covered in white again. The view from my studio’s windows was stunning. All the machines of the ongoing building works were covered in snow as if halted by the weather.

There were three major tasks on my agenda: first and foremost I wanted to print Shakespeare’s sonnet 89 (stay tuned, there’ll be an extra post). Additionally I wanted to print a keepsake for the upcoming artist’s book fair in Norwich: Turn The Page on 24 + 25 June. It is the fair’s first jubilee: the fifth time the fair will be open in The Forum, right in the centre of Norwich. On this blog you can find a post on 2013’s ttpABF in the Fairs and Markets category.

Plus: I had to do more packing. There is still no new place found and no date for moving the studio can be set. But every time I am staying for a working visit, I need to get some sorting and packing done. By now boxes are piled up in many a corner. While sorting some long forgotten treasures emerge: this tin box, for example. It is a set for rubber stamping we were once given by our bookseller, who had used it for a long time herself.

As I write this the sun prepares for setting, it is 6pm and the change to what is called summertime will be in a few days time. On our balcony the daffodils are at their best. During my absence the jackdaws have figured out how to get at the feedballs that are supposed to feed blue tits. They are clever black birds, they are. 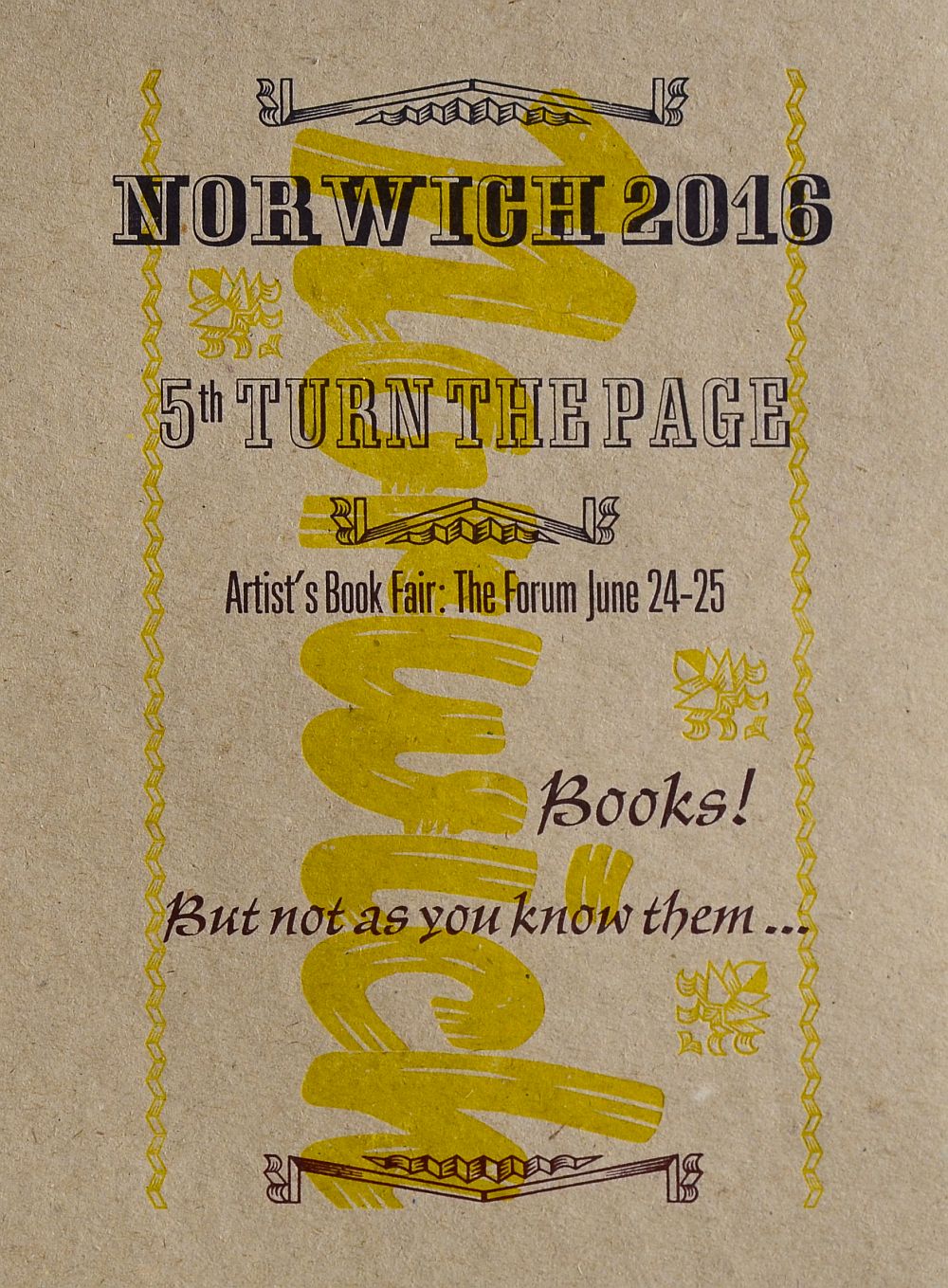 As a reminder: Save the date! Come to Norwich on 24 + 25 June for the 5th Turn The Page Artist’s Book Fair. Get your copy of my keepsake there and see books, but not as you know them!