Three months ago we were handed over the keys of the house. We are moving in gradually. There is a feeling of both familiarity and newness. We keep coming across things, we had not realised were there, things that come as a surprise. Old doors and windows burried and forgotten in the straw in the attic. Signs of habits long kept but somewhat outdated: all tools are labelled with the name of the owner and date of purchase. The umbrella too.

The main part of the house is said to date back to around 1893. Some parts might be much older. The vital parts like bathroom, kitchen and heating are pretty contemporary. A fact we are very grateful for. They are in good working order and we need not touch them for now. There is still enough work left. It goes without saying that the whole place has been designed for the every day work of a farmer. Accordingly we’ll have to convert part of it into a printroom and another part into a place where books will be bound. While these more substantial changes are being planned for, we tend to the lesser chores, which have to be tackled just the same.

All space used for work or living is on ground floor level. But of course there is an attic. It is not fitted for living in, unless you are a pigeon, an owl, a martin or a barn swallow, a marten or whatever sort of mouse. Some 20 years ago the whole of the attic was tediously packed with one layer of bales of straw. Currently we are step by step, meaning load by load getting rid of the old straw. From underneath or in between the bales some nice things emerge that have been burried there untouched for decades.

Buttons in a bucket

The most peculiar of them certainly is a bucket filled with buttons. But also there is an old stained mirror, an old farmhouse door, feeders for chickens, parts of an old fence, spare bits for a tractor which is long gone (it has left its keys in a clear plastic box with many others), piles of snippets of all sorts of tiles and a number of huge coils of baler twine. A farmer from one of the surrounding villages comes round every now and then and we load his trailer to the brim with the old straw. When I am up there in the attic piling bales of straw to have them at hand for the next loading there is somebody carefully watching. It is a tiny male black redstart. He is not on his own there, the whole family is living hidden somewhere in the attic. I could watch all three of them outside when working in the garden. They can be quite talkative at times.

Feeders in the attic

The garden-to-be is currently just a somewhat spacy meadow. On an old photograph it looks like if it had been used as pasture land. (We found the old field gates packed away in a shed.) Just beyond the fence in the back two large cherry trees are the happiness for some small flocks of starlings. They have a hang for the ripe cherries and are feasting there. For the past so many years the meadow was mowed and the grass or hey fed to cattle. This spring there seemed to be only one sort of grass and it was growing very quickly. We hardly managed to mow it in time before it grew long enough to clogg up our sit-on mower. However, the growth has slowed down and there are other species showing now.

Some species of hawksweed appeared in July turning most of the place into a sea of yellow. In one area there is a large population of mugwort. Somewhere I spotted dark mulletin, and out on the margin the odd poppy.

For a small scale start we re-planted some pots that have been overlooked for some time. With the help of a neighbour and his traktor we moved one trough to the entrance of the yard. Some of the shrubs had dried and had to go. I put in some flowers and grasses to accompany what might be a dwarf juniper which proved to be determined to stay. 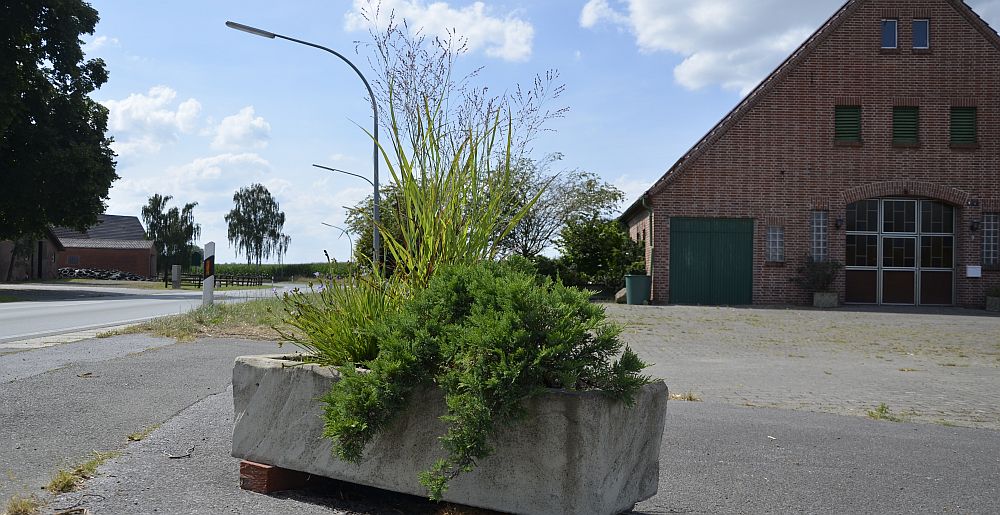 In the large room that is to become the bindery we found a basket-like plant container. With a bit of help we managed to move it outside and put in a species of Moroccan mint. I gave it some wallpepper for company. Wallpeppers are abundant all over the place as we have dry sandy soils and enough sunny days for them to strive.

Old carpet in the study

Apart from tidying up the attic and gradually developing the meadow into a garden, there are some lesser tasks in the house. The room that is to become my study was fitted with a rather old and worn carpet. The process of replacing the carpet with tiles is ongoing.

New tiles in the study

More new tiles in the study

The room that is to become the bindery is being used as storage space on a preliminary basis. First of all we moved all the old furniture there that was to go. Once all of this had gone the space was almost empty for a day or two. Then the movers came and we piled everything in there that had been stored in the container for over a year. And at times we needed to make space for the trailer to be loaded with bales of old straw.

As I write this the wind outside plays with the oak trees’ foliage in the night. I know there are mosquitoes out there. And owls. I have seen them sweeping the night sky without making a noise like if there was a shadow flying by. We could do with some rain. The past days have been mostly sunny and windy at times. And hot. The sand from the dry soils is blown everywhere.