Bespoke books are wonderful things, both while making them and when using them. For making them you need imagination, a feel for the materials you work with, experience. You need a number of tools, most of which are handheld. You need proper devices for cutting paper and boards. And you want a workplace you feel at home with. Having to move a bindery leaves you with a few boxes of tools and a number of items which are either heavy-weights or gaggers or both. 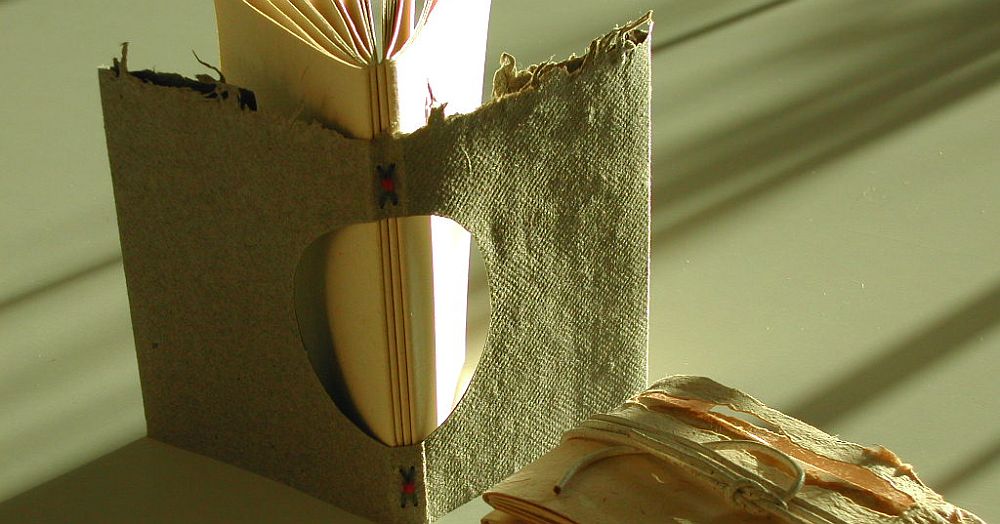 In mid-August we set out to get the bindery. After all, this had been scheduled for July to begin with. The most tricky to move were the board shear, the block cutter and the huge metal storage racks. The rest wass packed in boxes, some heavier than others. And there were the packs of paper, of course, sitting in piles or still stored in the racks.

We rented a lorry, drove 560 kilometres south and slightly east to where the studio still sits waiting. The board shear was built around 1912 or 1913. Its frame is cast iron, the table is wood. We decided against taking it apart. We took off the weight which when working is the balance to the cutting blade. Its shape resembles the drawn bombs in 1970s comic stories of bank robberies. It has an estimated weight of 40 or 50 kilograms and as it is rounded it is virtually ungrippable. It comes as a surprise to basically anybody who tries to lift it up. It almost always fools people new to the job. The block cutter is not even half as much fun. It comes in one piece. Fullstop. It is bulky and heavy and the lever is fixed and protrudes and will poke you unless you keep in mind that it’s there.

We started loading with a fair number of boxes and the board shear. We decided to have the block cutter in my delivery van, which was unjustily dwarfed by the truck we had rented. The four book binding presses were perfect company for the block cutter. The metal storage racks could not be loaded upright, as their height exceded that of the shipping space. We laid them, which gave us the opportunity to pile the packs of paper on top of them.

Transporting packs of paper always makes me feel uneasy. You need to wrap and pack them neatly. I have a good stock of very different qualities of paper. The range is from deckle edge papers and designer papers to glassine, Japanese and handmade decorated papers. Some of the qualities in my stock are old papers you would not be able to go and purchase nowadays. You would need to be lucky, as I was, to come across them at some old bindery or printing office closing for good. 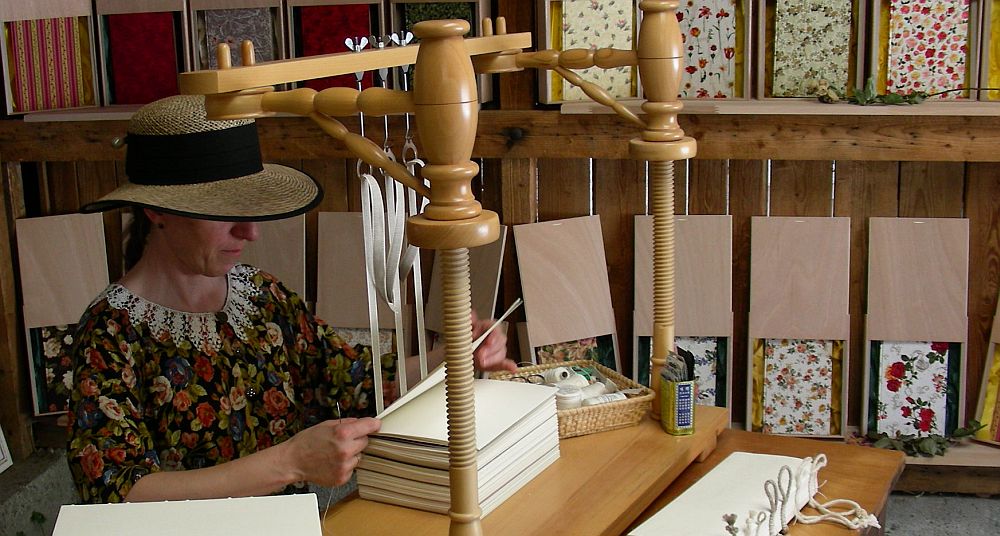 Even if the books you set out to make are of a fairly reasonable, say ordinary size, you will need a quite large table to work on. You will have to handle full size sheets of paper while folding to produce sections you can then sew together. So the table needs to be big. My worktable is built from four type cabinets set in a square with a large chip board on top. We started loading this table with disassembling it. We filled the cavities in the shipping space with rolls of bookcloth. We stuffed the canvas booth I use when at arts&crafts fairs on top of one of the lying storage racks. It comes with large rolls of canvas (kind of like sails) and a number of battens making up the wooden frame of the booth.

Book covers made from fabric

Basically, books are made of two materials: paper and cloth or fabric for that matter. I love to use fabric for my books’ covers. Cotton or linen, even towel linen, hessian or silk, corduroy or Chinese brocade, Italian jacquard and African batik, English linen with classic flower patterns or even handwoven material. I love the touch of the fabric on the book. The variety of patterns is fascinating. All my stock of fabric made up for a number of large movers’ boxes plus a couple of bolts of cloth.

At this point we must have been loading for almost three days. A heartfelt thankyou goes to Denny, a dear friend who came round on Saturday to help us almost all day lifting and dragging and piling. She was patient enough to find spaces for small odds and ends. Where would we be without her help? Still loading, I presume. And a big thankyou to Klaus, my landlord, who helped lifting the block cutter into my van and gave us a hand with the board shear.

On the field beyond my studio’s windows a small circus was camping, the tent packed away. All shows were over. One large pole had been painted blue and was drying in the sun. They were preparing for moving on some time next week. A long tent was put up as a shelter for the animals. There were two camels, a small herd of goats and four ponies. On Sunday just before noon the camels had pushed over the fence and that was when the four ponies went for it. They cantered away across the road having car drivers slaming on their brakes. We all left what we were doing running to help catching the ponies. We stood guard at the road and everybody else was grabbing collars and ropes to get the ponies. The four obviously were enjoying themselves cantering across the field, meandering around the old apple trees there having their people chase after them. It was a field I know fairly well as I used to walk our dog there. Finally the ponies were all caught safely and put back in their pen, together with the camels who had a look on their faces saying „It was not us.“

Last but not least we loaded: potted plants. They all had been given asylum in my mother’s garden. We had left the plants in her expert care in spring 2015. We could not load them all. We decided on the young bushes like yew, rowan and guelder rose. Plus all the pots with tulips, daffodils and herbs. Plus the bryony. That was when we closed the door of the lorry. The trip back was in a way an adventure as we got stuck in a massiv traffic jam following a road accident of an HGV which had spilled its load on to the motorway. This event nailed my dear husband driving the lorry to the spot. He had set off early in the morning and when he got home it was 8pm. He had spent most of the day on the road, almost 15 hours altogether. We got the plants out of the truck and that was that.

The aftermath of this hampered journey left us with only one morning to unload the truck, as the deadline for handing back the lorry was 2pm. A whole bunch of heartfelt thankyous goes out to our neighbours. Three of them came to give us six hands for a couple of hours after they were through with the morning chores on their farm and with their cattle. We were five to unload the truck. We managed to be at the car rental company by 1.58pm. Slightly tight, but still in time.

Most of the bindery has moved by now. So far everything seems to have arrived unscathed. The plants are striving, the bryony is showing a new set of flowers. The weight of the board shear is in place again the working table re-assembled. The bindery is not yet back to full working order, but we are not far from it. We have booked the lorry for another trip in late September.

As I write this the sunflowers open their huge flowers one by one. They are of various shades of bronze, from dark brown to almost yellow. The swallows and martins are still chasing flies on our patio. They have not left yet for their autumn migration. I’ve seen a flock of starlings recently, so these are staying on, too. They were gathring in numbers in an old oak tree, of which we have so many around here. In a blink they had vanished from the sky and hid within the foliage of the tree. Summer is clinging on longer than usual. But this morning, quite early, I watched a formation of geese in the sky travelling. It looked as if their intention was to be gone.