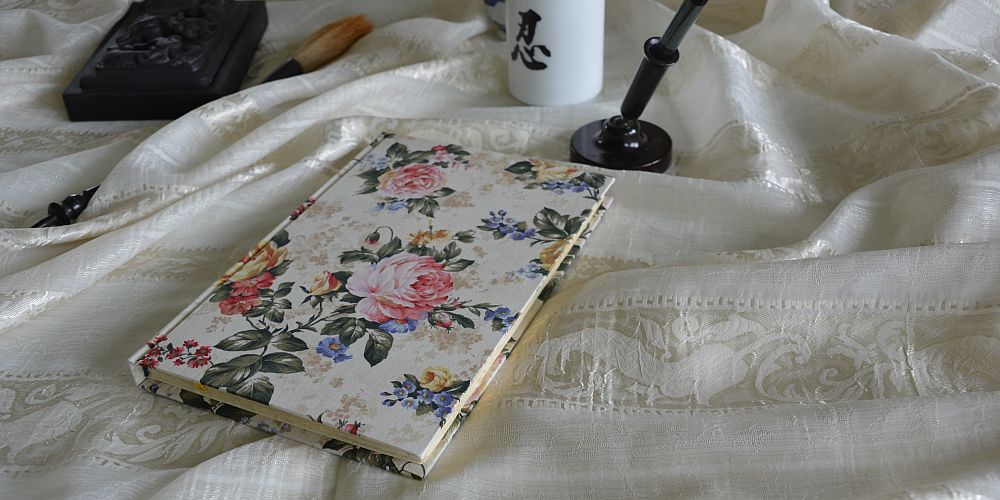 During my ongoing process of relocating I found things I had long forgotten about. One of them was a little red notebook. Its cover is made from red plastic sheets and it has a white wire binding. I used it as my travel diary during a family summer holiday in France and we must have bought it locally at some stationary shop. There is no note about the year but it must have been in the early or mid 1970s. I had pasted in picture postcards of the location and vouchers of a pancake (crêpes) vendor called „The Golden Anchor“ plus a table of the opening times of a marine zoo.

Until today I keep my diaries like this. I even constructed a special type of book which is designed to keep safe bits and pieces pasted on to the pages. My journals have always been companions for me. They are all worn and brim over with all sorts of snippets and odds and ends. I very vividly remember a trip to Scotland in 2006 during which my journal got soaked inside the rucksack. It was one of the first I had designed and made entirely myself. I dried it over night under some more or less heavy things I had with me, and it was fine. It still is.

In September we set out with a rented truck a second time to get the remaining components of the bindery. The intended side effect was to clear the front part of the old place in order to be able to move out the presses and type cabinets from the back. I left our old farm in the north on Thursday 22 September.

There was still paper left to pack and load. There were two old wardrobes that wanted to be dissembled, one of which we had turned into a storage place for prints years ago. There were four sideboards and work benches one fitted with a thick and weighty worktop made of black schist. Ad to that there were a fair number of type cases that would have to go on this tour because they don’t fit in any of the cabinets.

However, this tour still was abut moving my bindery, making it complete in the new place. I enjoy making books differently. I still want them to bring a message or come with blank pages to hold a message somebody puts in. I still want them to be proper books and be handled as books. I believe the nature of a book is that of a vessel, transporting something inside, that will be revealed or set free by opening it and turning the pages.

Cover made from towel linen

Cover made from brocade

As a child I adored those wee little Chinese boxes all covered in cloth. Mostly the fabric used was shiny brocade and inside the box was something delicate. A precious brush for calligraphy. Or meticulously carved chopsticks. Once I started bookbinding I wanted to have a go at using fabric for book covers. Over the years I tried a lot of different qualities of fabric. The most sturdy must have been some hessian from a coffee sack, the most delicate a silk cutwork fabric, handmade in Asia.

We kept loading the truck for three full days. The last to go in were, again, potted plants. Some young shrubs and bushes, some ferns plus the two hydrangeas and the begonia still in bloom. For a brief anxious moment it looked as if it was impossible to fit all in. But then, quite miraculously, it worked out and we made the lifting ramp go shut. In my van, once more unjustly dwarfed by its bulgy cousin, some items were nestled together that were telling of the more challenging part of the relocation process that is still to come. Two small platen presses, one of which our Adana 8×5, were carefully padded for the journey. The larger platen was strapped safely in the truck. The printing gear was till sitting in the old place untouched.

This time the journey back went pretty uninterrupted. Wednesday was a sunny day with temperatures in the mid 20s feeling like late summer. Back at the farm the sandy soils had gone dry like dust. Thursday was the day to unload. We had one whole day, but we only just so managed to have the truck empty before it went too dark for the job.

There was an early start on Friday to hand back the rented truck. Here it goes, dawn just breaking. Only minutes later the really big vehicles came to the farm. But this is a different story altogether, to be told in in one of the posts to follow. First of all we will have to prepare for moving the presses and type cabinets in mid October. The date is set. Stay tuned.

As I write this the sunflowers keep nodding their golden and bronze heads in the wind. We have had chilly nights, unseasonably chilly to be honest. The crows and jackdaws and magpies had their family gathering on our meadow today playing a game around the walnuts on our neighbour’s tree. And the far reaching view to the west is restored after the field of maize has been harvested these past days.