This summer was a challenge for two reasons. Firstly: it started in mid April with temperatures rising to 30 degrees and lastet well into October. And even though November has seen the odd morning with white frost it is still too mild for the season. Secondly: there was hardly any rain.

Since we moved here in 2016 we have planted more than 30 trees and well over 40 shrubs and bushes. Most of them had been in the soil for less than or not much over one year, so the ongoing lack of rain was putting them at considerable risk. Starting from April until well into October watering the bushes and young trees was a main concern. 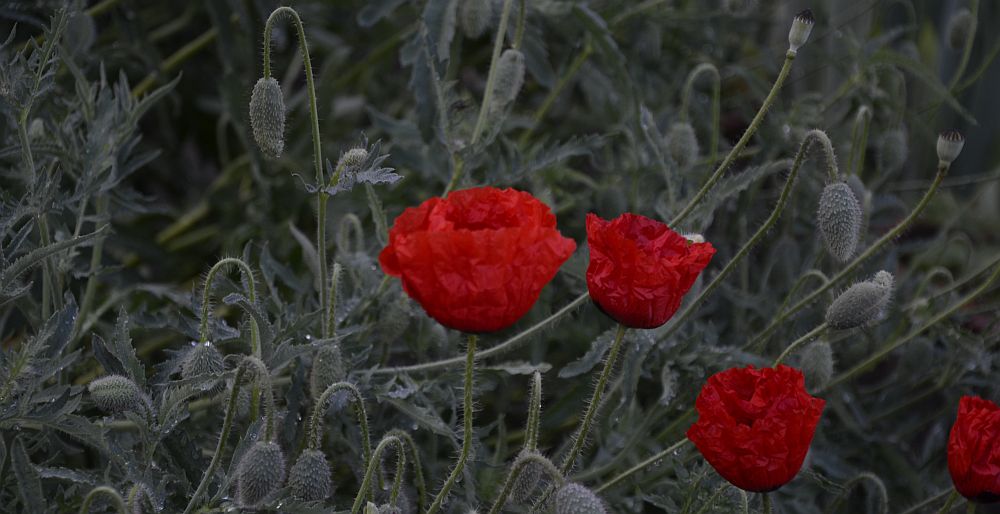 During spring and early summer there was a wealth of poppies and cornflowers and bees and bumblebees were feasting. I desperately tried to keep the crimson clover alive and it started flowering in early autumn. We had a large plot of buckwheat which the bees enjoyed and once the seeds appeared the plot got invaded by sparrows.

We had a patch with rye which mostly succumbed to the drought. But the crown-of-the-field was going strong. The patches with flax were doing well. Some of the rhododendrons kept struggling and some even did not manage to open their flowers due to lack of water.

After last year’s failure to bear fruit due to a spell of rather late frost, this year the fruit trees went bonkers with blooming and making apples and pears. Unfortunately the latter became gradually more difficult due to the lack of rain. Most of our young apples got infestated by insect larvae. Some just stopped growing and ended up as miniature apples eventhough they were meant to grow into propper edible fruit. But we got a fair share of pears and a few apples.

Our sunflowers were thriving. At first they were full with bumble bees and once they started building seeds they got raided by the birds. They all came to feed: blue tits and great tits, goldfinches and greenfinches, sparrows and willow tits. The goldfinches came as a family with three youngsters. Later in summer they all were joined by chaffinches and the little wren came back – no idea where it had spent summer, but it had been there in early spring already. In November a cheeky robin appeared feasting on the left over elder berries.

The climbing beans waited out summer and started flowering and producing beans once the days got shorter and the worst heat had gone around September. We did have a bumper crop of beet root and black currants and a fair share of sweet corn. And pumpkins. This year it was Hokkaidos, Sweet Dumpling and White Acorn.

In late May Lotta came to complete the team. Back then she was around half a year of age and we picked her up at an animal shelter. As far as we know she had not been living with people so far, and a lot of pretty ordinary things were completely unknown to her. On a first encounter she decides to sit down and think about it.

She chewed up a couple of things but luckily she learned pretty quickly to keep her teeth off cables and she did not ruin any of our shoes. She has grown into a friendly funny little mate and we love her to bits. There is still a lot she needs to learn but she is young enough so there is still time. We have started attending dog school in summer and she is making good progress.

With having the dog we now get out and about much more. This is lovely because we do live in a beautiful spot and in autumn the cranes come to rest and you can see them feed in the fields – which is not to every farmers liking. Nevertheless they are impressive birds.

Our house garden was getting along fairly well in the dry weather, apart from the hydrangeas. They are thirsty plants and wish for a fair share of rain. I kept watering them but they did not manage to grow to their usual size. The roses, though, and the grasses could take advantage of the dry weather, mainly because we did have no strong winds or gusts. So the grasses still stand in their beauty as they did not get torn to pieces by gales. 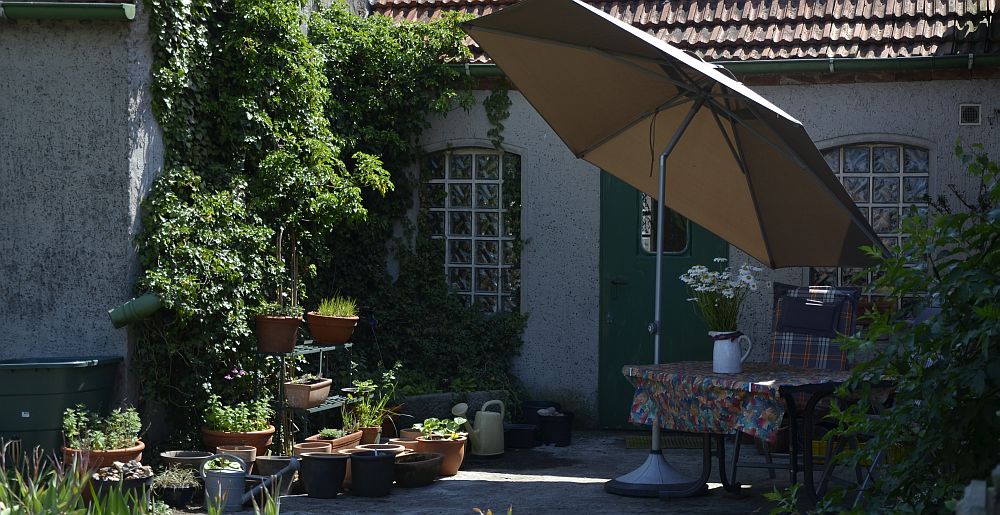 We almost lost one of our medlar trees to root voles. The roots had gone alltogether. I put the young tree in a pot with good compost soil and kept it in a sheltered place on the patio. It dropped all its buds, but kept its leaves that were far too tiny. At some point in summer it started growing new leaves of normal size. Now its leaves are golden and it prepares for winter. Next spring we will plant it out again. From our second medlar tree we got a nice first harvest which made for three jars of medlar jelly. We had our first three walnuts but their size does not seem right.

By the time I write this it has gone dark outside. Not all of the resting cranes have left by now. Autumn has coloured the foliage of the trees bright yellow and golden. They days have gone short and rain is falling every now and then. We could do with a couple of weeks of ongoing rain to moisten the dried out soils.

1 thought on “An almost endless summer”