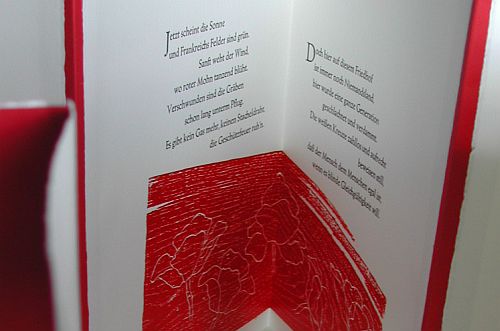 When I was a student studying in England in the 1980s I heard about Remembrance Day for the first time. I saw all these people wearing their red poppy flowers pinned to their shirts, jackets or coats. And then I wondered whether they seriously wanted to ‘celebrate’ the horrific First World War that England had been involved in. It took me some time to understand that I had got it quite wrong back then. 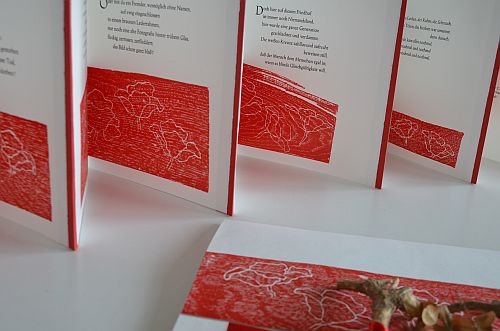 When the horrific killing finally came to an end on the 11th November 1918 it left Flanders devastated. Large parts of the countryside had been ploughed over by the massive bombing and the dismembered bodies of thousands of soldiers had gotten mixed with the soil in a way they could not be brought home or even buried in the proper respectful manner. Within days the countryside had turned into a sea of red: millions of red poppies covered these fields of grief and horror. Red poppies are summer flowers; they don’t usually come to bloom in November. On the other hand, a botanist would be able to give a quite unspectacular explanation as to what happened then and why. 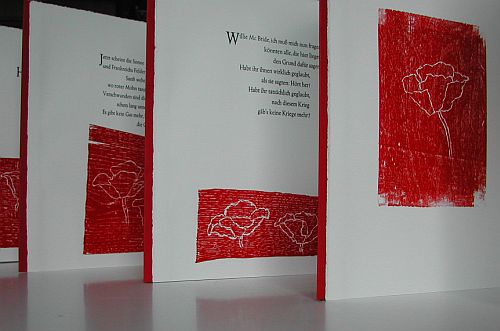 However, there’s a bit more behind this. For a very long time the Red Poppy has been seen as a symbol for both Death and Life. People in all their grief, pain and despair, could see the message pinned to the coat or jacket and understand. The still unknown total death toll of WW1 demanded action to be taken for Life and for the living. The Red Poppy became the symbol for Remembrance Day, a day to remember not only all those, who had fought and died, but also those individuals that had survived wounded; who had lost a limb or their sight. The Red Poppy is also a symbol for the families who had lost a father, a brother or a son, and for the many young women who had lost their husbands, many of whom had only been married weeks or months earlier. The Red Poppy reminds us of the tragedies any war can bring. This simple red flower is a warning to always be aware and be prepared to take appropriate and timely action against looming conflicts. 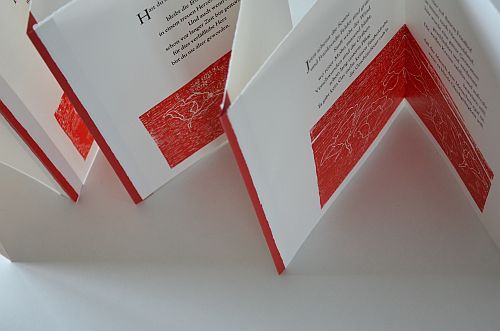 In 2006 I asked Scottish-Australian folksinger and songwriter Eric Bogle if he would give me the permission to translate his song ‘No Man’s Land’ into German in order to make an artist’s book. He immediately gave me permission. I loved his lyrics and very much enjoyed translating them into German. Then I made 5 woodcuts of Red Poppy flowers dancing in the wind over Flanders. The finished result is a concertina-folding type book; the sheets of the deckle-edge paper are connected with poppy-red folds. The woodcuts are rubbed off by hand and printed poppy-red. I used blocks of oak wood that had cracks and an interesting wood grain, giving a most pleasing texture. 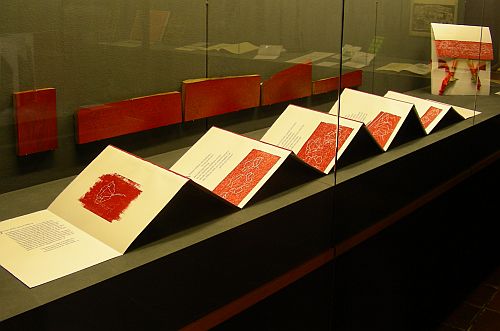 The song text is set by hand from a very old and much used metal type: Trajanus. The book is housed in a portfolio with a clasp made of poppy-red ribbon and Boxwood twigs. Boxwood was very commonly used as a border of graves, symbolizing eternal Life, everlasting true Love and the overcoming of Death. The edition is signed and numbered and limited to 11 copies relating to the particular date and time of the 11th November at 11 o’clock in the morning when the guns finally fell silent. 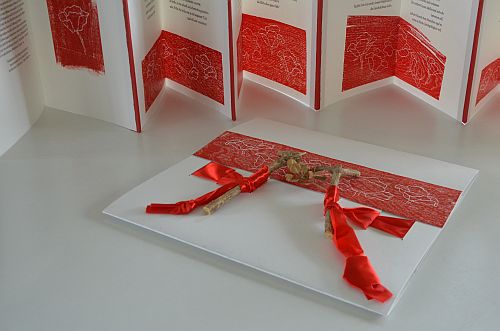 Find more here: http://www.bleikloetzle-goes-british.de/html/red_poppies.html
including a link to Eric Bogle’s original lyrics and a reference for further reading.