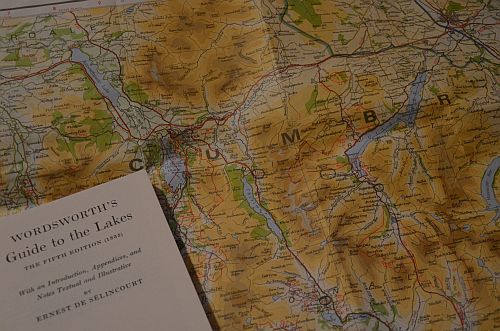 When on holidays in Scotland some years ago we went into an antiquarian bookshop where we found “The British Encyclopedia In10 Volumes Illustrated”. It was ever so cheap – for the simple reason that volumes 7 to 10 were missing. Being book lovers we couldn’t resist bying it anyway. It had been published back in 1933. Vol 3 said “CHI-DUN”, which meant China-Dunstan(St.) and we find “CUM’BRIA” on p 360. It reads:

“An ancient British principality, comprising besides part of Cumberland the Scottish districts Galloway, Kyle Carrick, Cunningham, and Strathclyde its capital being Alchuyd or Dunbarton. It was possibly at one time the chief seat of the power of Arthur and in the sixth century was an important and powerful kingdom …The name still survives in “Cumberland”. 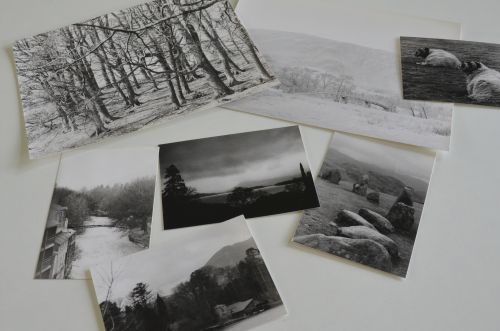 Now “CUM’BERLAND” we find on the previous page 359:

“The extreme north-western county of England … There is great variety of surface in different parts. Two ranges of lofty mountains may be traced – one towards the north to which belongs the ridge called Crossfell (2892 feet); and the other to the south-west of which the highest peak is Skiddaw (3053 feet). … The two largest rivers are the Eden and the Derwent. The county embraces part of the “Lake Country” of England. The largest lakes are Derwentwater, Bassenthwait, Loweswater, Crummock, Buttermere, Ennerdale, Wastwater, Thirlmere and part of Ullswater.
Cumberland is rich in minerals, including lead, gypsum, zinc, and especially coal and rich hematite iron-ore. In the western division of the county there was a great many blast-furnaces, and works for the manufacture of steel and finished iron. The principal crops raised are oats, barley, wheat and turnips, but the bulk of the enclosed lands is sown in clover and grass. The rearing of cattle and sheep and dairy-farming are engaged in to a considerable extent.
Carlisle is the county town, the other principal towns are the seaports Whitehaven, Workington, and Maryport; and the inland towns Penrith, Cockermouth and Keswick. 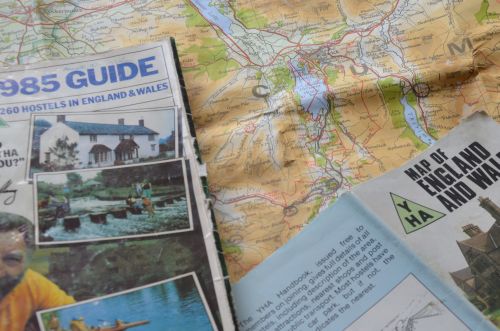 I visited Cumbria back in 1985. It was not spring in the sense that the trees had not yet grown their leaves. There was still a sense of winter as snow was covering the summits of the mountains. It was end of March, I was sleeping in Youth Hostels and some of them were still in winter mode with reduced opening hours. I had decided I wanted to see counties I had not been to so far and since I had only been to Sussex, Essex, Oxfordshire and Berkshire there was a lot more to see than I had time to travel going on what was called a 4-week BritRail ticket. 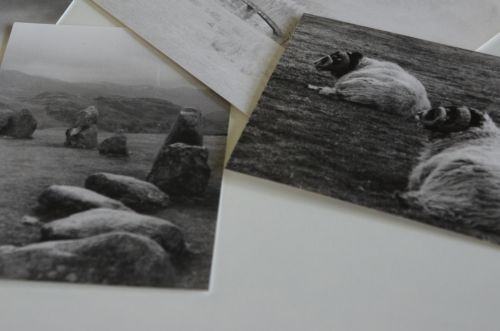 After one week in Cornwall I was heading north to the lakes, going by train from Falmouth to Penrith, only just so catching the last bus of the day that would take me to Derwentwater Youth Hostel. A few days later I moved on into Keswick Youth Hostel. I have still got the old YHA brochure describing all the hostels in England and Wales and as to Keswick hostel it says:
“Former hotel, near centre of busy and popular lakeland resort at the northern end of Derwentwater. On river Greta overlooking Fitzpark. 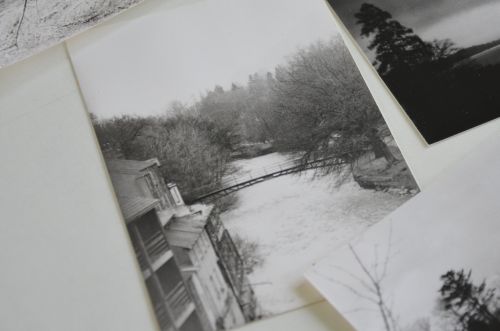 View from the window at Keswick Youth Hostel

And my diary tells of the murmur of the river running past the walls of the hostel, then swollen from some late winter rain and the melting snow on the mountains. And even though I missed out on noting it down I still remember vividly that they were selling homemade flapjacks in their shop which were absolutely delicious.
On one of my last days down in Cornwall I had been visiting Trelissick Gardens and bought a copy of William Wordsworth’s “Guide To The Lakes” in their shop. 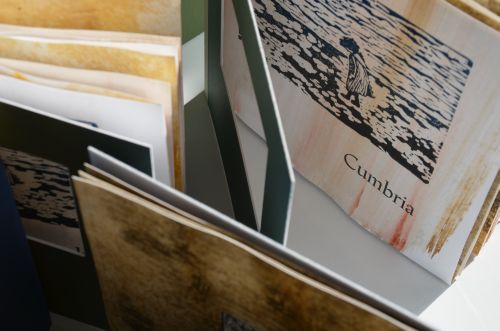 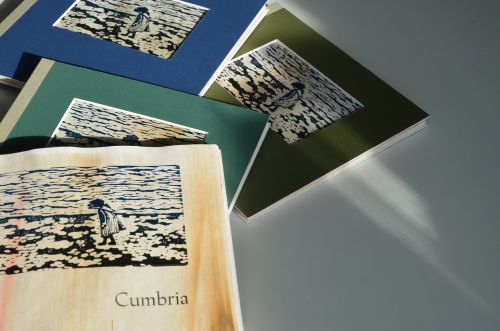 The idea I had in mind when designing my artist’s book “Cumbria” was that it should be like a walk out somewhere not far from Keswick and Derwentwater. The images are woodcuts showing places I went past when I was walking some of the paths there. The text passages are taken from Wordsworth’s guide, the lines being sprinkeled in between the images like some text passages you might have read years ago will all of a sudden spring to your mind while you walk somewhere in the woods or over meadows taking in the scenery, the sounds and the scents. 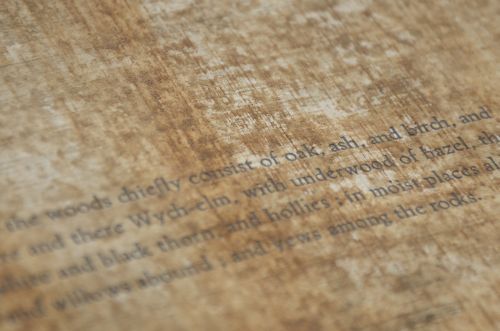 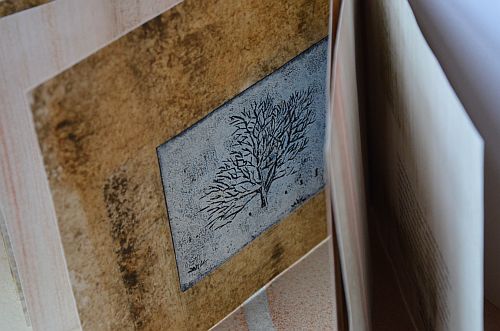 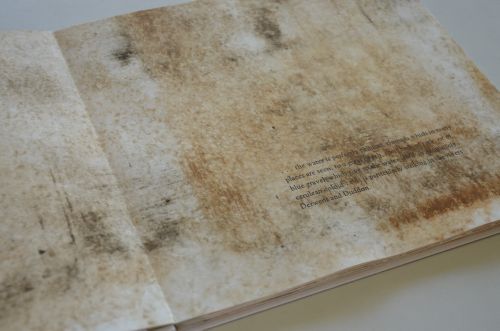 The sheets for the book have been painted prior to printing with specifically made colours using soil pigments. The text is hand set from metal type, the fount used is Trajanus. The book covers are made from passepartout board, the woodcuts are rubbed off by hand, the text is printed on a cylinder proofing press (Grafix). 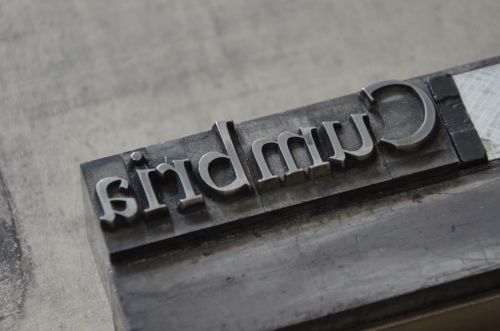 The book is an edition of 6 signed and numbered copies, printed in early 2013. Copy No. 1 is the special edition and it comes with a separate woodcut print by the same title “Cumbria”, copy No. 1 as well. It is, in fact, one of the prints from the book, done separately on deckle-edge paper – in an edition of 6 just like the book –  to be framed and hung up to the wall. 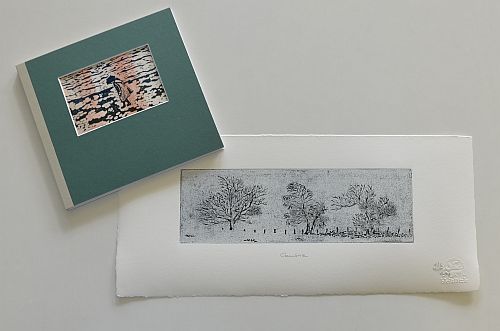 Cumbria – special edition of the artist’s book with print.