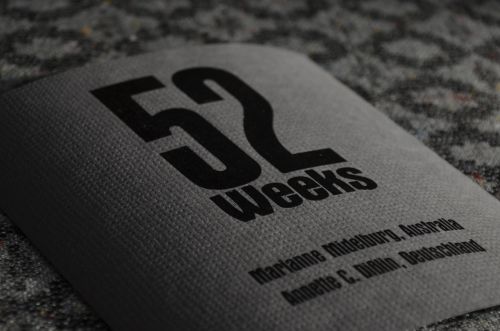 Moments. Our life is full of them. Infact, you could come to think of our lives being made up of innumerable moments, some of them might be related to each other, others which seem to come and go without any apparent connection. It is as if they can only be perceived by being flashed by a strong light source; to then turn invisible as soon as the light dies away. Centuries ago philosophers wondered whether things only existed as long as they were looked at; ceasing to exist as soon as no-one observed them. 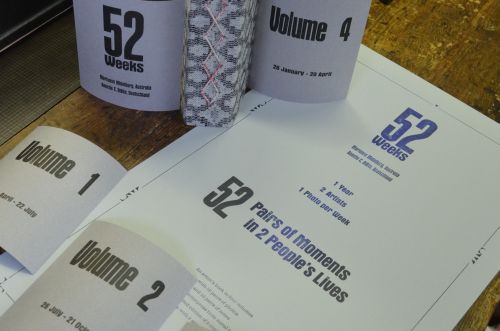 We feel that our lives are moving in a line, be it straight ahead or zigzag. Our physical senses constantly perceive sensory input in the form of images, sounds and smells; we are permanently feeling the effects of cold or heat, wind or rain, the texture of our clothing on our skin. This gives us a glimpse of continuity. But our awareness is not static; it also constantly changes.  It falters from time to time and from circumstances to circumstance.  Our memory can be very selective picking out this and missing out on something else. It is as if we are never told the whole story.  Always there remain interstices, little gaps which we may never fill; and so we may never discover what really happened when we were not looking. 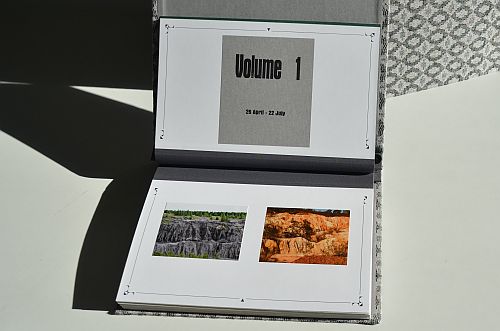 This line of thinking has always fascinated me when I travel by train, especially train travel at night.  I sit in a comfortable carriage, looking out into the dark while the train races past villages and through open landscape, past roads and over bridges. There are houses scattered out there, some windows dark, some brightly lit, an ambulance might rushing somebody to the hospital the blue flashing lights cutting through the darkness.  Momentary glimpses of people having dinner or an argument, somebody proposing to a beloved, their neighbours brushing their teeth. None of these people are aware of the others around them. So many lives with interstices, these little gaps are being lived out at the same time, almost in a parallel manner.  However, many of these lives progress presumably unnoticed by most of the others. Not being looked at and thus – in the sense of those old-time philosophers –  seemingly non-existing.

„52 Weeks“ is a photographic project about moments, a book about these gaps, about the many things that often go unnoticed. The original concept idea is as follwos: Two people agree to both take one photo per week over the period of a whole year and write short commentary to accompany each of the images. One of the two artists, Marianne Midelburg, lives in Bendigo, a former gold rush city in Central Victoria, Australia. The other contributor is me and I live in a rural strip of southwest Germany not far from Stuttgart and the Swabian Mountains. 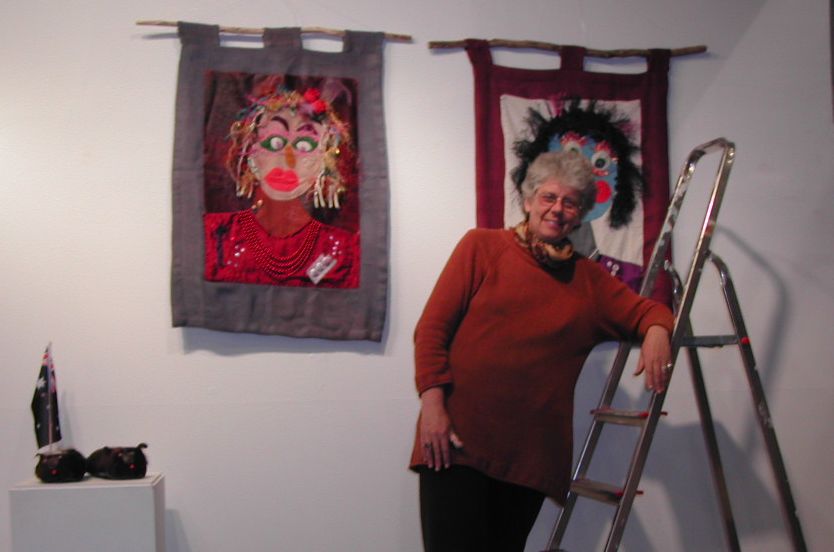 Marianne Midelburg putting up her 2007 exhibition in Germany

Of course „52 Weeks“ is also a book about two artists: about Marianne Midelburg and me, about where we live, about what we do all year round and especially about the things we look at. We first met in 2007 when Marianne was visiting friends in Germany and having an exhibition with her textile art, her hat creations, her collages and landscape photography.  We both had been involved in collaborative artistic projects before, be it on a regional, national or international scale.

Marianne had participated in several community arts project; one highlight being the Centennary of Federation “… such fertile ground …“project in 2001. Marianne was one of twelve artists who created large-scale landscape installations across the state of Victoria, the aerial photographs of each work were then made into postcards. 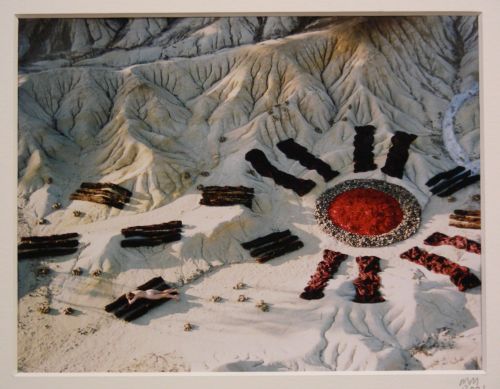 In 2006 she was approached by Margaret and Christine Wertheim to become one of the “core reefers” to create the Hyperbolic Coral Reef for the Institute for Figuring, Los Angeles (USA).  Since then, this crocheted Coral Reef project has extended rapidly to create many satellite reefs and has become a global project to raise awareness for the state of all coral reefs and the effects of global warming. 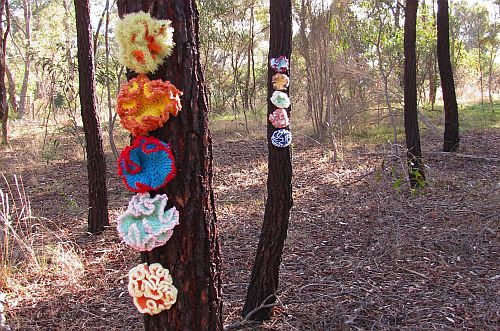 In 2009 I became involved with the worldwide activities of the al-Mutanabbi Street coalition. Their main aim is to commemorate the car bomb attack of March 5th 2007 on al-Mutanabbi Street, the historic literary centre of Baghdad.   There are many book stalls and tea houses in this street, it is a centre of culture and communication. With readings and artistic projects in poetry, literature and printmaking the coalition tries to make people aware of how vital and, at the same time, how vulnerable free access to books, information and education still is. As a printmaker artist I have contributet to the Broadside Project and the al-Mutanabbi Street Inventory Project. In 2013 there was a large exhibition of the al-Mutanabbi Street Inventory project at the John Rylands Library in Manchester. You can find a blogpost in the “Artist’s Books Archive” about this show in that breathtaking location. 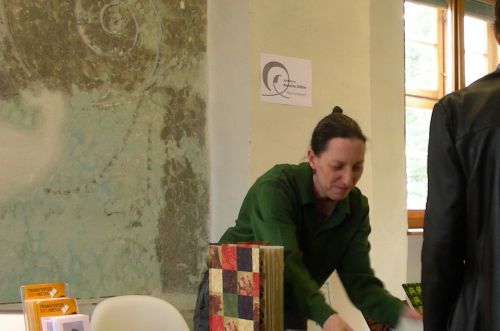 And so finally in April 2011, I decided to begin work on the concept for the book (after Marianne had instantly agreed to join in): one year, two artists, with one photo per week per person resulting in 52 pairs of photographic moments plus a short text. We both wrote our comments using normal every day language, Marianne wrote in English, I dod so in German. The comments are handset from metal type and printed letterpress; the photos are traditional prints. Naturally the book has an album binding, as this would be what penfriends would do with their collected letters, photos and other memorabilia: glue them into an album. Thus the finished work resembles something like a week-by-week double diary. 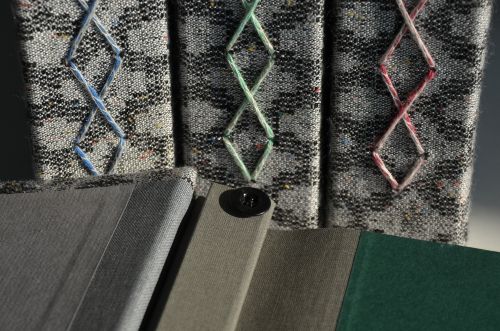 So, in a nutshell: one year from April 2011 to April 2012 – 52 weekly pairs of moments, one pair following the other in their natural progression, making the gaps in between only the more evident. We will never be able to look at all and everything.  There is an abundance of things that’ll go unnoticed by us. However, we can always remind ourselves, that they all exist, whether or not we are looking. 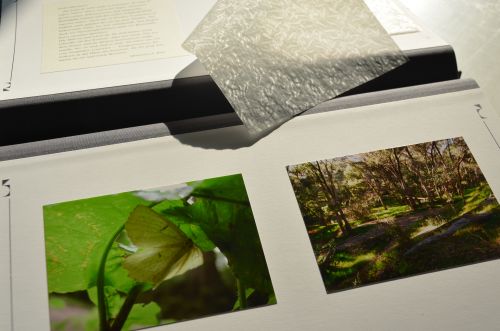 “52 Weeks” – factual data
With 56 photos and comments by Marianne Midelburg (Australia)
and 56 photos and comments by Annette C. Dißlin (Germany)
4 volumes, 30 x 36 cm each, total weight 13 kg
124 pages with 114 photographs (traditional prints), including 2 portrait photos of the artists
Edition of 6 numbered copies signed by both artists
Copy No. 1: special edition with two extra photos (FineArtPrints), size 30 x 18 cm
With an English translation of all German comments (enclosed in a bag in Vol. 4) and some used stamps

Come and peruse the new book at Turn The Page artists’ book fair in Norwich (UK), 2nd & 3rd May 2014.  The fair is open 10am to 6pm on both days in the entrance hall of The Forum right in the city centre of Norwich. 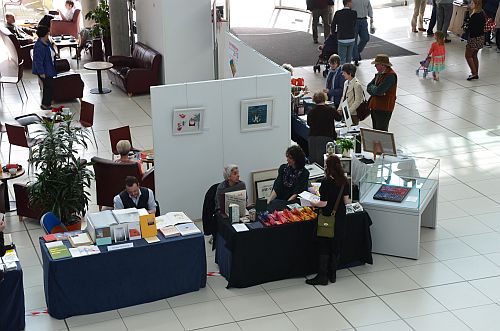 Find a blogpost on last year’s Turn The Page artists’ bookfair in Norwich on this blog in the “Fairs and Markets” archive – klick or scroll down to May 2013.

If you look for more information on the “…such fertile ground” project, you’ll find it here: http://www.abc.net.au/arts/fertile/default.htm
If you like to read more on the Crochet Coral Reef project: http://theiff.org/current/
One piece of Marianne is part of the satellite reef which is on the Isle of Föhr in the Museum der Westküste: http://crochetcoralreef.org/satellite/foehr.php
there is abook about to be published on the Coral Reef project, if you like to read more about it:
http://crochetcoralreef.org/

You can find more information on the activities of the al-Mutanabbi coalition with all links on the German + English website:
http://www.al-mutanabbi-street.bleikloetzle.de/