As the year 2015 draws to a close I can say it was a rumble strip for me. By the end of 2015 it is eight months since we have left the southwest and so far we still have not found a new home for the studio and ourselves. Our everyday life has ever since kept its makeshift character. This is charming at times. And when I write “at times” I mean it.

November was pretty busy. There was the Fine Press Book Fair in Oxford, the trip to the Teutoburger Forest and finally I was heading even further east to show my books and prints alongside some 45 colleagues at 5th Weimar Book Arts. With it being the end of November Weimar was fairly festive with a good number of Christmas market stalls spread out in the old town. When I walked the cobbled streets and lanes on my first night in town, there were people everywhere and lights and colourful stars blinking from behind many a corner. And in the many restaurants the windows were light, the rooms full with diners and buzzing with life.

The book arts fair was in Neue Weimarhalle in the congress centre right in the middle of town. A lovely venue with large windows overlooking a nice park. The exhibition was opened with Mr Seeman, chairman of the trust Classic Weimar , addressing the audience with what was perceived as an inspiring speech and a praise of book art. The tables of the 45 exhibiting artists were spread out on two floors, ground floor and basement, and the architecture of the building was a very good match for the books and prints on show. In the entrance area, welcoming all visitors, Johannes Follmer was showing his craft of hand papermaking. While not attending fairs he practices his craftsmanship at  Paper Mill Homburg.

Quite some famous people used to be living in Weimar over the centuries. It was not only Goethe and Schiller. Herder had been around as well and many more. And with all the old buildings and facades still around there seems to be an air of their presence and their spirit still lingering. The Duchess Anna Amalia library was housing an exhibition on Dante Alighieri, commemorating his birth 750 years ago.

Gudrun Illert, initiator and organizer of Weimar Book Arts, had arranged for a very special Sunday morning treat: Prior to the fair’s opening, our group of book artists was given the once-in-a-life time offer of a tour of this Dante exhibition lead by the curator of the show himself: Mr. Edoardo Costadura. He is an expert in this field and a Professor in Literature Studies at Friedrich-Schiller-Univerity in Jena. Now, this was an ever so wonderful way to set out for the second day of Weimar Book Arts, giving even more inspiration for future work. 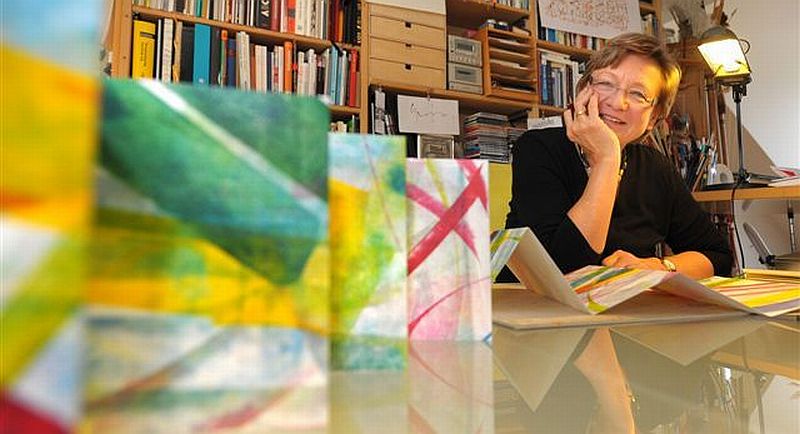 There goes a huge „Thankyou“ to Gudrun and all her helpers, who went to any lengths to make this exhibition a real treat for both artists and visitors. 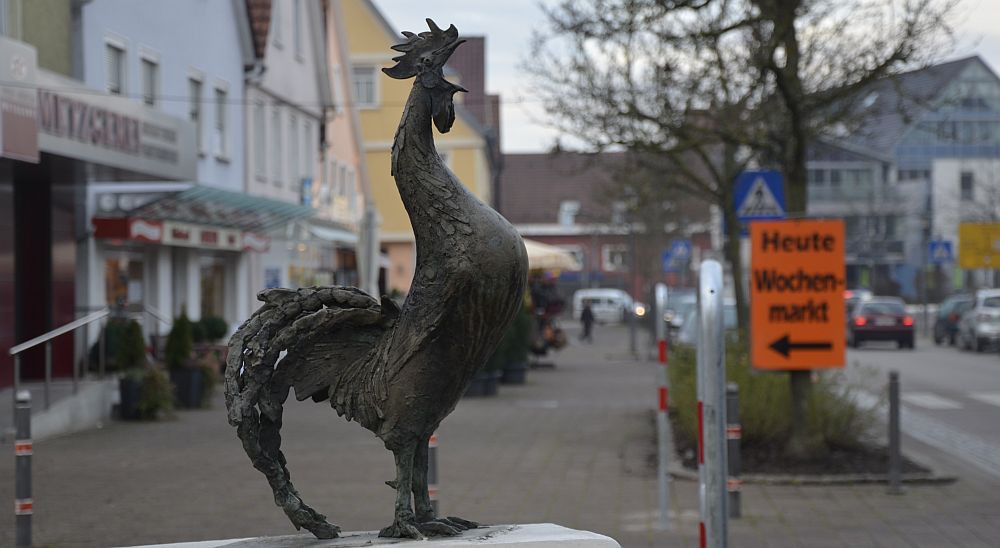 Part of the Market Fountain in Ebersbach

For the festive days we swapped one makeshift home for another: we went down south to meet up with family and friends there. Christmas Eve sent us into the little town of Ebersbach for a last bit of pre-Christmas-shopping at the baker’s and at the farmers’ market. This is the town where I founded my studio in 1999. The place has changed since then and there is still a lot of building works going on. There was a bypass road built years ago and following this the town centre could develop into something less dominated by heavy traffic giving pedestrians more space.

We paid a short visit to the town of Goeppingen, where I spend my years at Gymnasium. The image shows a park not far from the school I attended. The town centre was still occupied by what is called their „Forest Christmas Market“. It is a special sort of event with many fir trees being put up first and all the stalls built in between the trees and it is meant to look like a market in the woods. This event is open into the days after Christmas so we walked past stalls where the salespeople desperately tried to make us realise that this was our last chance to buy whatever they offered (plush Mignons, for instance).

On 26 December we went to Reutlingen. The town is less than an hour’s drive by car away and we used to go there often to see exhibitions at Kunstmuseum Spendhaus. With HAP Grieshaber having lived in the vicinity this museum is dedicated to the art of woodcut. Right now they showcase works by H. N. Werkman. He was a printer, painter, businessman and artist based in the Dutch town of Groningen (amazingly Groningen is not all that far away from the place where we are living now). Mr Werkman was taken in custody and later shot by the Nazis in 1945 – just days before WW2 was over. His art work is amazing. For many years he was running a commercial printing office. Later, as an artist, he started to use type experimentally thus creating a new way to look at and work with typography. He, too, was involved in printing connected with the resistance against the Nazi occupants. The show and Werkman’s art work gives lively and disturbingly convincing evidence of the experiences that are being made with a Fascist regime coming into being and, while establishing itself,  repressing and humiliating whoever and whatever they find not properly accepting their way of thinking.

The exhibition will be on until 28 February – if you are anywhere near, I strongly recommend visiting it. The show will travel on to the National Museum Schwerin/Ludwigslust/Guestrow and can be visited there from 2 March to 4 June.

Last but not least we went to the studio. It was a bleak day with fog drifting around the base of the mountain Hohenstaufen. There was still bits and pieces I had to pack as I’d need them at hand for the upcoming fair in Hamburg. We bid our fairwell on January 1st, taking it nice and steady on our 500-km-route back north. And of course, once back, we made it into the Picasso Museum in Muenster showcasing the fascinating Giacometti sculptures. I had seen some of them many many years ago in Basel. In 1980 there was an iconic exhibition of sculputural art in the gorgeous park of Riehen Castle. Back then the Giacometti bronzes were shown alongside sculptures by Rodin, Moore, de SaintPhalle, Tinguelly and so many other great artists.

As I write this it is just after 8am and it is still fairly dark outside with dawn just starting to show. My four-wheeled member of staff is parked outside waiting to be loaded. On Friday this week the two of us will be hitting the road, headed for the book arts fair in Hamburg. Three years have passed since I was able to show my books there and I am ever so happy to be back. “Norddeutsche Handpressenmesse” is organized by the association “BuchDruckKunst“.

(There is a special blogpost on the 2013 “Norddeutsche Handpressenmesse” in the „Fairs&Markets“ category on here – or check out the 2013 posts in the Archive section.)