During my first attempt to pack up our stuff way back in April 2015 I had thought I could quite as well store away our winter clothes. By the time we’d need them, the container would be unpacked and we’d be reunited with all our belongings. Then I had second thoughts about this. I decided it would do no damage to have the woolen handknitted jumpers, the scarves, the thick jackets at hand. Expect the unexpected. A sudden arctic spell. You never knew.

Now, almost 10 months later, the big container is still in storage with the movers. Everything neatly tucked away inside of it. Every now and then I feel I’d like to look up this or read that before realising that I can’t. The book I’d need is in storage. Being a bookish girl the books are the things I miss the most. Next to the books I miss our red sofa. It was lovely to snuggle into its corner with a book. Next to the books and the sofa I miss my studio, my presses, my type – which of course have not fitted into the storage container, but have had to stay put in the old place. And I miss at times the odd pot I liked to cook a stew in. But, honestly, you can improvise on that. Since I moved in with my husband here in this small flat we’ve had baked beans and apple pies and flapjacks and all sorts of things all homemade. But, without the big casserole there is no way we could have cock-a-leekie. And the casserole sits deep in the storage container.

Winter has been comparatively mild so far. We did have some dusting of snow. We did have icy roads with rain freezing onto the surface in a blink. There have been good reasons for wearing the handknitted woollen jumpers, though. My journey to the artist’s book fair in Hamburg was good and safe. No delays. The fair was lovely as it always is. But there have been sad moments, of course. Only weeks prior to the fair Heinz Stefan Bartkowiak had died. 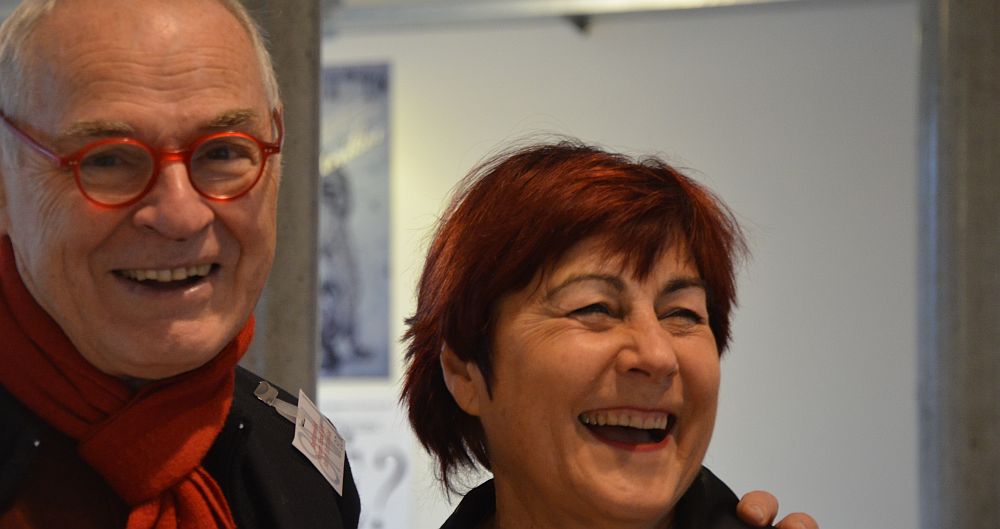 He and his wife Wibke had been ever so dedicated to the world and folks of book arts for decades. They had been publishing „Bartkowiak’s Forum Bookart“ for a long time. It was a year book with essays, portraits of artists and studios and a catalgue listing new and backlist books in the world of book arts and fine press printing. The pair gathered a group of like minded friends and volunteers, all of them joining into the association „BuchDruckKunst e.V.“. Thus forming a strong basis for activities, one of them the „Norddeutsche Handpressenmesse“ at the Museum der Arbeit in Hamburg-Barmbek.

At first the fair in Hamburg used to be every other year. Since 2013 the fair is held every year. There are two in-depth essays on the fair and the venue here on this blog dating from 2013. This year’s fair, once more, was very nice. So we are all looking forward to the fair in 2017.

Meanwhile, back in the town of Nottuln, I learned that somebody had pulled down the wall my display case was in. This came quite as a surprise as I had rented out the display case for a whole year (lasting until into August 2016) and nobody had pointed out to me it would have to be removed. So all my posters and stuff was still in there one day, and the next day everything was gone. It took me a couple of days to find out who was involved in this. And it took some negotiations. I got a refund by now, but unfortunately the display case is gone for good.

At my table at Turn The Page artist’s book fair in Norwich, 2014

Those past few days a number of notifications trickled in. One of them was to let me know that I was chosen to exhibit at this year’s Turn The Page artist’s book fair in Norwich. This event will be on 24 + 25 June in the Forum right in the city centre. So it is ferry time again in June.

The Forum in the city centre of Norwich

Another one was to let me know that I am part of #154sonnets. This is an effort of the Centre for the Study of the Book at the Bodleian Library in Oxford. In the 400th year of William Shakespear’s death all 154 of his sonnets are to be printed anew by artists worldwide. I am registered to one of the sonnets, mine is No.89. The deadline is on 30 September, which means, there’ll have to be one more working visit to my far away studio sometime in the spring or summer.

As I write this it is pitch black outside with the street lamps glowing. It is neither a full nor a new moon. We are still having strong winds and rain at times. On our miniature balcony I had been keeping four decorative cabbages, two of which have succumbed to the wet and mild winter weather. I replaced them. It is daffodils now. It is spring we are moving towards.