At long last we found a home for the lot of us including the presses and all metal type. It has taken considerably longer than we had wished for or even expected – and the relocation process is far from being over. Our home-to-be is a moderately sized old farm in the village Oppenwehe. We are out in the countryside and it appears we’ll see a lot more of those sunsets in the coming years.

This will be only a very brief preliminary introduction. There are so many stories to tell. As there will be a lot of hard work to get finished before we can even think to move in the presses and type, there’ll be plenty of opportunity for further blog posts to tell all the tales. We did have very poor connectivity which is why there was so sparse news over those past weeks. We are on landline by now.

We had our first date with the farm on a rather wintery day with nasty weather conditions including freezing rain. The old farm looked unfazed. It had seen winters come and go ever since the end of the 19th century. Why bother. The house was uninhabited but well looked after. A number of pieces of furniture had been left there. Most of it had to go, but there are a few nice little cuties that will stay with us.

And once more we moved in at a place on a makeshift basis. But this time we are moving in to stay. First of all the essentials got set up, i. e. the kettle and the tea bags, and of course the mugs. I started living in one room, with the kitchen next door on one side and the bathroom next door on the other. We had to move out the old furniture first to make room for the walls to be stripped off their old wallpaper and get them some new wallpaper and paint.

While shoving the furniture around we took some time off to pay a visit to the local windmill. The village is one on what is called Westfalen Mill Trail, which connects places with old mills of all sorts. The village is situated between two large lakes: the Dümmer to the west and Steinhuder Meer (Lake Steinhude) to the east. The area is very rural with many small villages and known for its tasty asparagus. There is a lot of grazing land for cattle and tree lined roads with lime and birch and oak trees.

We’ll be living in a rural part of the district of Minden-Lübbecke, not far from the most northerly point of North Rhine-Westphalia. The village itself ist called Oppenwehe which is one out of 13 villages that have joined up into an administrative federation called Stemwede. 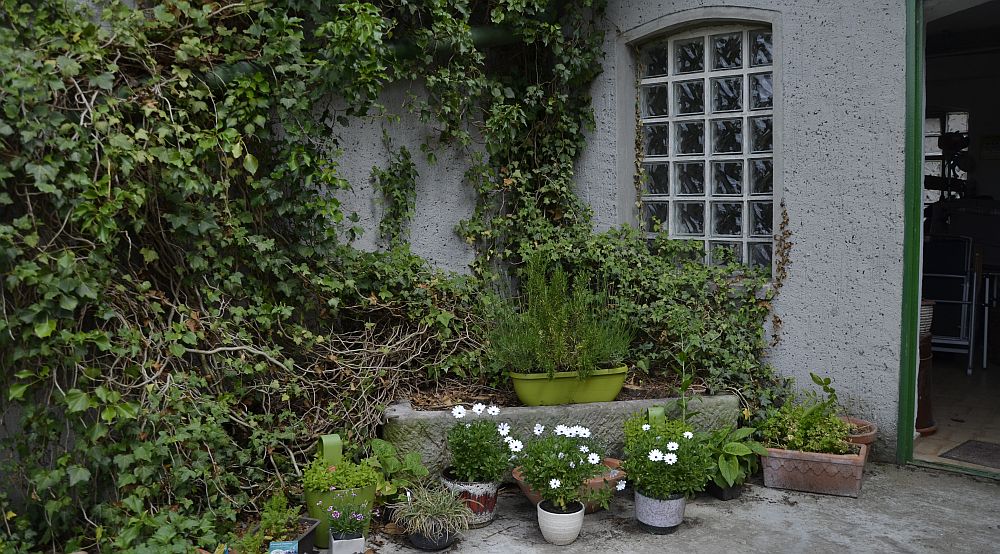 There is a little patio out at the back of the house and we put some of our plants in pots out there. They seem to like it. We like it there, too, particularly sitting there with a mug taking a break from whatever work has to be done. And we had two first fletchlings of the year in May already.

Blackbird fletchling on its virgin flight

As I write this there are clouds in the sky and we have sunny spells. The elder bushes are in bloom and a strong wind is blowing. We have had a good number of sunny countryside summer days lately including some thunder and lightning around the oak trees, and a fair share of rain, too.

A huge and heartfelt thank you goes out to all of you who never stopped thinking of us during our search for a new home. Thanks for all your good wishes, they worked.

And as a little reminder, just in case you were having second thoughts:

It goes without saying:
We’ll be in Norwich at this year’s Turn The Page Artists Book Fair later this month at 24 + 25 June.

Save the date and see us there and the books and prints and everybody else and the Norfolk Longbook and whatever there’ll be to see and be part of! Let yourselves be surprised with „Books but not as you know them!“