We are settling in gradually. There has been a nasty cold spell rather early in November that left us wondering what winter would be like here at our new home. We had expected it to be milder than where we used to live.

We’ve had a number of tasty cakes, there have been stews and biscuits and flapjacks – which, for as long as I shall live, will remind me of Keswick youth hostel, where I had them for the first time.  But, basically, our first winter in the new home is still quite busy.

On a sunny day in November the new windows were built in on the front facing east. Originally there had been glass bricks in place. After breaking down the glass bricks the yard was covered in shards. The large door will be replaced next. The hinges are worn and each time we have strong easterly winds the door keeps rattling.

In mid December we discovered that the young medlar trees we had planted only weeks before quite obviously were to the liking of the resident rabbits. So we needed to quickly build some protection for the young stems from the wire mesh we had used to keep the root voles off of the tulip bulbs.

In December there was not enough time for the painters to get all their work finished in the pressroom-to-be, so they resumed their work in January. The last task was the varnish for the concrete floor. There was no chance we could move the type cabinets and presses in any sooner than mid January.

The builders had left part of their machinery in our back yard and in January some snow fell covering it all nicely. In the following days temperatures stayed low, there was no more snow but we had fog. 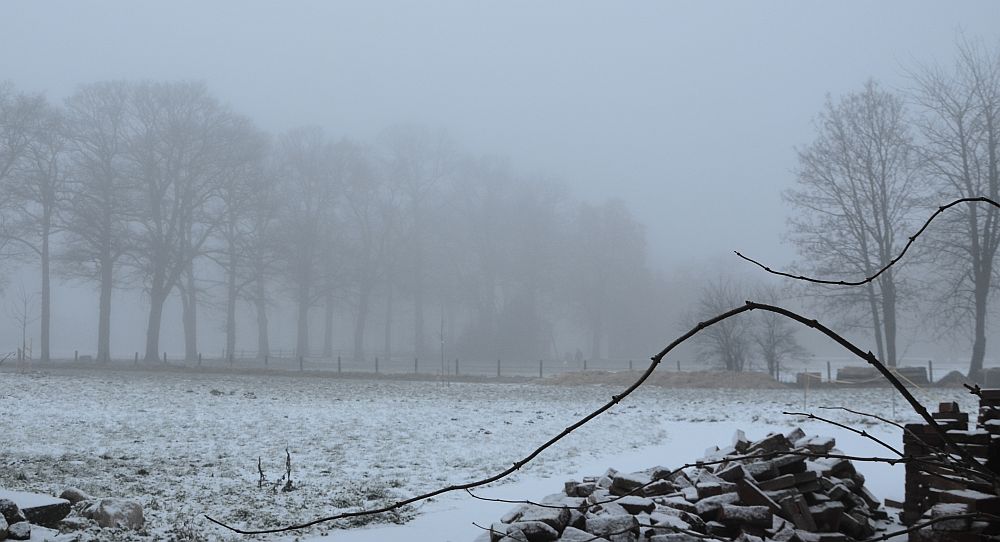 Now this is when you realise that there is a peat bog not far. Over a few days there was fog and frost and the fog set out to freeze on to all surfaces. It froze on to wire mesh and barbed wire, branches and twigs, leaves and spiderwebs. 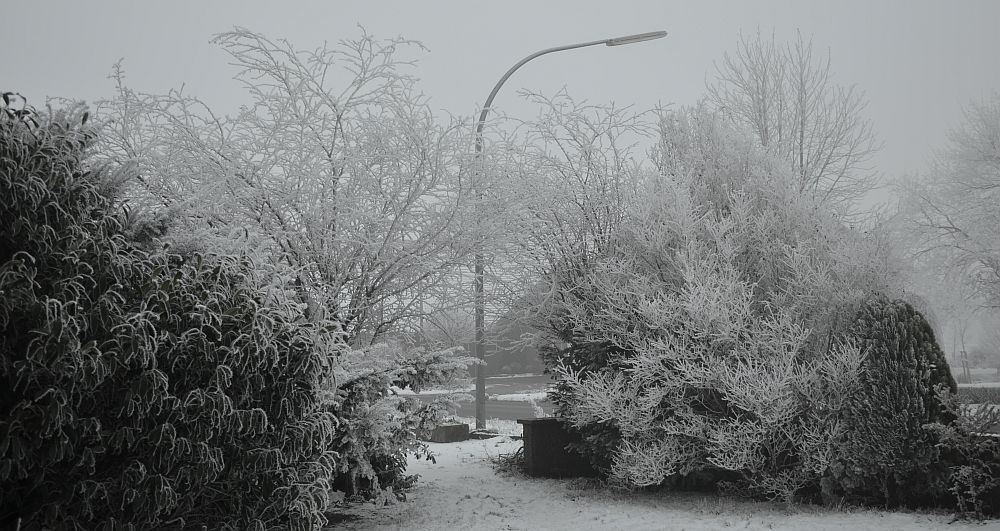 The view to the west changed once more.

Into the west – January

We live in a very beautiful place all year round. The rooks still come for their lunch browsing our meadow. A family of magpies joins them every now and then. Geese travel to and fro over our farm. They might be roosting in the bog and feeding elsewhere – or the other way round.

As I write this the woodpeckers are hammering their trees and the little birds have started to sing their songs again. There will be another cold spell. But days are much longer than they were during winter proper. Soon spring will come and the tulips will start to grow and colour the garden.