The days have become short and the trees are balding. Some mornings come with a hundred shades of grey and silver while dense fog flows like a giant’s veil over the barren fields. Summer has gone, winter is not yet here. A few of the many cranes have not departed so far.

The untimely frost in late spring did not allow us to have apples or medlars. But we did get a wealth of pumpkins instead. We had beans and mangetouts and many a cob of maize. We had small forests of sunflowers. The place got invaded by butterflies, bumble bees and lady birds.

We had a stoat visiting in early spring. We had hares boxing in dusk. And we had three little ones in September at the foot of one of our apple trees.

Where the beans and maize were grow winter onions now. Many of the sunflowers are still standing. The birds were quick in finding them devouring their seeds. 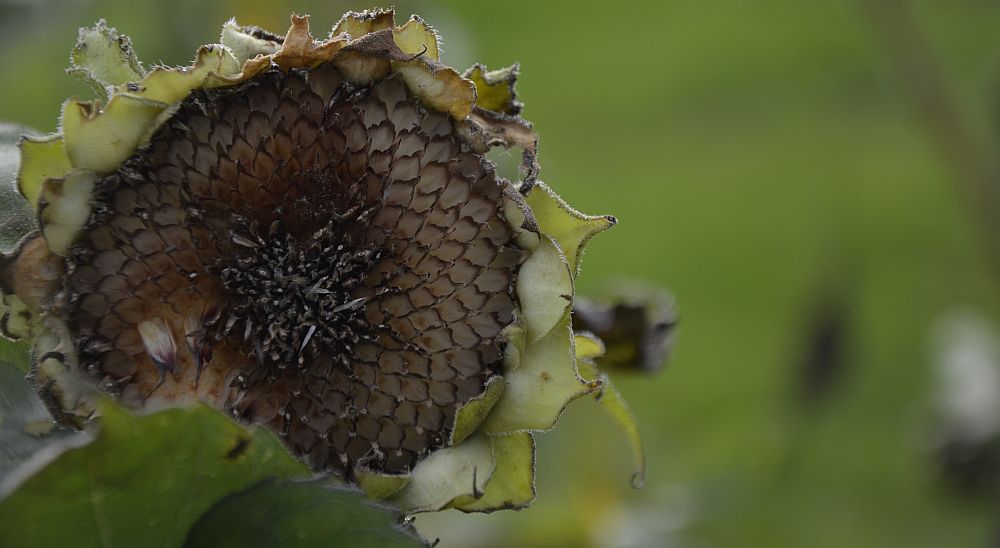 And there are still flowers – even in mid-November. The nasturtiums shine in bright yellow and orange and a beautiful brown-burgundy.

The white dead-nettles are still in full bloom. They are the first to go ahead in late winter feeding the early bumble bees. They still fed those large bumble bees when we were working outside in early November. There is a second generation of borage flowering right now. And we had butterflies baking in the autumn sun in late October. A large oriental poppy braved the autumn storms.

Our garden has changed. Some of the changes result from the change of season, some have come about through us working. It took us almost four days to get all the shrubs planted that will grow into our hedgerow over the next couple of years. Most of the time we had to spend on clearing the strech from weeds, mainly quitch. The long striped roots in some places looked like a pack of spaghetti. There is sea buckthorn now, and broom, juniper and cherry laurel, elder and a young birch tree. All of them with their roots neatly safeguarded by wire baskets to prevent the root voles raiding the newly planted.

As I write this we have not had frost yet. It is mid-November and it was a day of heavy showers and strong blustery winds. However, there was the odd sunny spell. The oak trees have not yet lost all their leaves. Some mornings the dew looked as if it was white frost. It was not, but it might well be any time soon.