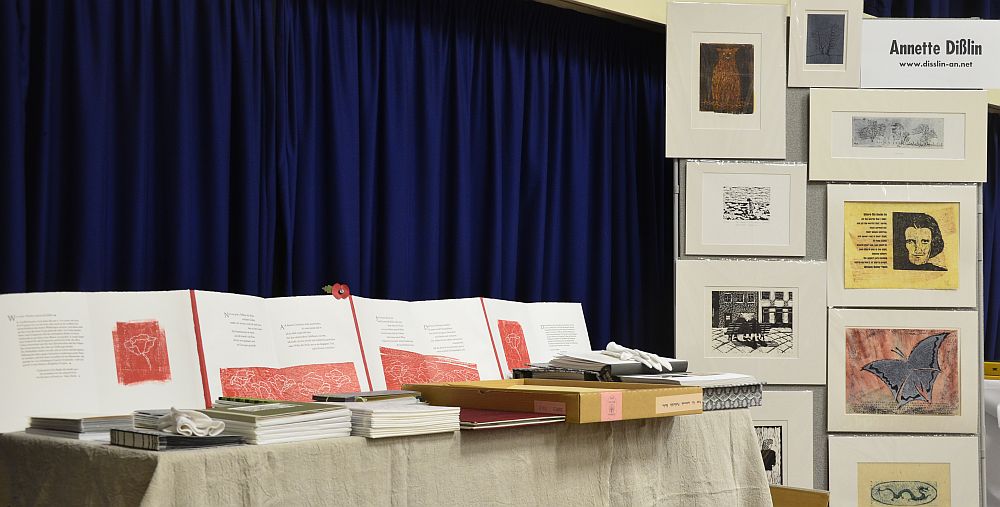 Earlier this year I had rented a showcase just kind of round the corner where we now live. When I had been for my second working visit to my studio earlier in October I had packed some of my prints and posters to put into that showcase. Before heading for the ferry that would take us to Harwich I quickly decorated the showcase as best I coud – looks like water might be leaking in somewhere from the back. 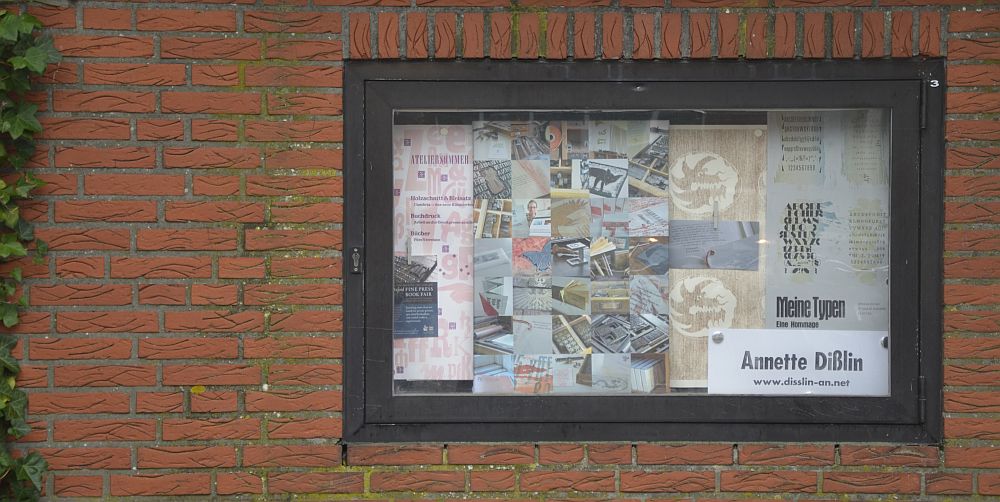 We were headed for Oxford with the Fine Press Book Fair on 31 October and 1 November. Now, this was somewhat special for the fair was coinciding with both the Rugby World Cup Final and with Halloween. People really had to make their choice as for what to get dressed up for. The Saturday being Halloween was all spooky and foggy.

When we were walking into town in the evening we came past hordes of skeletons, witches, vampires, beasts and girls that pretty certainly would be catching the cold of their life during the next couple of hours. However, Sunday was a bright, sunny and lovely autumnal day. With having a table myself at the fair I did not have all that much opportunity to explore everybody elses books and prints and tables. But I had the perfect place to follow things as they evolved.

There were a good handful of awards to be given to outstanding work and artists. One of them was the Toby English Award which was set up to commemorate Toby, the very unique and inspirational fair manager of many years, who passed away only weeks befor this year’s fair was to open. Here are some of the colleagues who were awarded for their works. (I somehow lost track during the event but shall try to update this blogpost asap regarding the other award winning colleagues.)

Paul Kershaw, wood engraver and running Grapho Editions, saw two awards. The first time we met him he was running Orbost Gallery on the isle of Skye. That was back in 2007. Some years later he moved to Yorkshire. We met again at the FPBA Stockholm Library Tour in 2011.

Carolyn Trant, running Parvenu Press, had published „The Alchymical Garden“ by Sir Thomas Browne earlier this year. It was out at Turn The Page Artist’s Book Fair 2015 in Norwich. She also is among the colleagues who have contributed to the al-Mutanabbi Street Starts Here projects.

Jamie Murphy took an award home to Ireland where he is running Salvage Press. We met Jamie earlier this year at Whittington Day and when he was speaking at the Oxford Guild of Printers meeting in September.

The fair is open and buzzing with visitors.

We did have some time to spend in Oxford itself and of course we went to the Queens Lane Coffee House and to the Covered Market. We even could fit in a nice and quiet day in Burford. We spent the Monday following the fair in Banbury. The little town is right on the banks of the Oxford Canal, and we watched the odd narrowboat using the locks.

On our way back we decided to leave early. We had one stopover in Braintree for tea and cake, and went straight on into historic Harwich. We walked around Dovercourt and Harwich with a rather cool wind making us feel quite chilly (and me opting for putting on my woollen jumper). Having had one last fish ‘n chips for this year we parked ourselves in the queue for boarding. The crossing was smooth and got us into Hoek von Holland by early morning. There was not a lot of time at home. On Friday we were off once more. We were to be spending our first weekend in famous Teutoburger Wald. 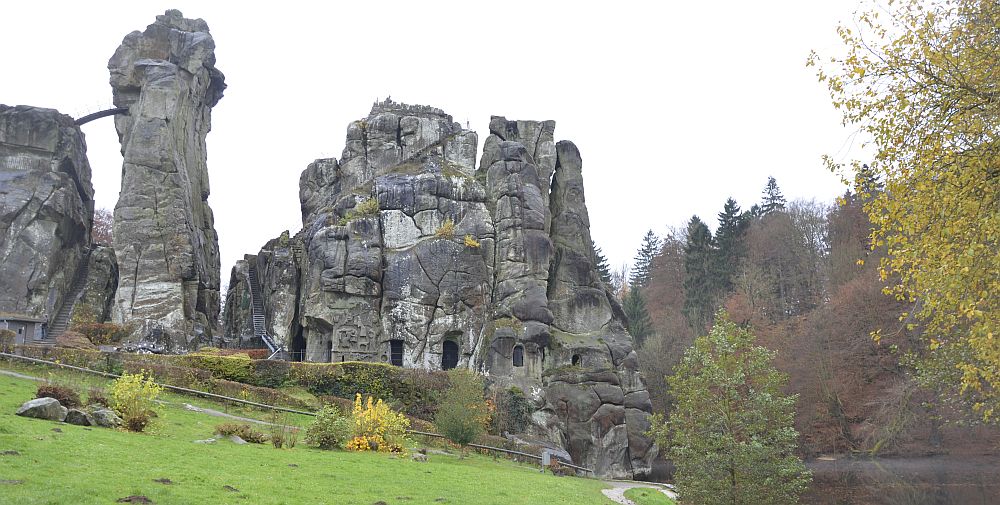 We went to see what is called Externsteine. It is a massive and impressive formation of sandstone. A nice little museum is nearby and they show a lovely computer simulation video about the specific process of weathering in these sandstone rocks. Over the centuries the rocks have been put to the most different sorts of use. They had been shelter and hermitage, a place of hunting for the gentry, and later a resort of amusement with a tramway running through a narrow gap.

We went for the odd little walk around where we were staying. It is all slopes and hills and up and down and cattle in the fields and bracken bordering the forests and glowing golden in the atumn morning’s sun. And it is nice and quiet and time seems to be here to stay.

We had taken a box stuffed with books with us. And with the sheep on watch just outside our front door, and the fire crackling in the kitchen stove we just stayed put reading – and loved it. (I can recommend: The House at the Edge of the World by Julia Rochester – which we bought at the Madhatter Bookshop in Burford earlier this year. We can recommend the shop as well, they sell lovely hats: my husband bought one and it suits him ever so nicely. So, if you are in Burford in Oxfordshire, you can’t miss them, they are right on the main road.)

While I write this rain is hammering against the windows. We are having a severe downpour and gusty winds. It has gone almost dark by 5pm. The weekend is said to bring snow. My next travelling might turn out to be wintery already: