This second post on my Relocation Journal will fill you in about the first sequel of us moving away from the southwest and about where we are living now.

We have moved to a country of red bricks, impressive trees and avenues – and horses.

Before leaving the southwest I paid a final visit to the Museum of Literature in Marbach/Neckar. There are two famous places called Marbach in the southwest: one is famous for its horses and one for Friedrich Schiller. This time I went to the latter. In 2006 the new museum opened and it is a stunning building designed by David Chipperfield Architects. The current exhibition is discussing the specific character of the original piece of artwork as such. It goes without saying that the show is focussing on literature and writers. The exhibit is part of their series of „essay exhibitions“ and a nice little brochure is published alongside. The show will be on until September 13th. But by then we’ll be far far away…

At last the days came when things were going to happen. When we finally cleared the flat we had sunny days and frosty nights. Gradually the impression of a lived-in dwelling trickled away as bit by bit furniture and boxes left the place and got stored in the huge container.

Our tulips on the balcony had only just started to open their flowers. The pots needed to be re-homed. They travelled to my mother’s garden where they will have all the care they can wish for as my mother is a passionate gardener. Since we will not have a garden for the time being, we only kept four pots of herbs for cooking including parcel, English mint, caraway and a few varieties of thyme.

On Saturday April 25th we hit the road heading northwest. Münsterland gave us quite literally a warm welcome: it was all sunny. Stuffing our core belongings into the smaller flat (while leaving the bulk in the storage container at the movers’) was tricky but it worked out-we are now experienced.

Next thing we were heading for was the farmer’s market in the city of Münster. The region is known for its tasty asparagus. The plants grow well in the sandy soils. The season has only just started and soon the strawberries will follow.

The market is spread out on the large space just in front of Münster Cathedral or known as Münster Dome. Virtually everything is decoratd neatly in the numerous stalls of the weekly market. The city of Münster is known for a wealth of things. Among them the abundance of sculptures.

We are now living in a town called Nottuln, which is part of the region called „Baumberge“. Literally translated this means „Tree Hills“. While Münsterland is basically quite flat, Baumberge is an elevation of some 187 metres above sea level. It is the highest elevation in Münsterland. Baumberge is famous for its decently yellow sandstone. First quarries have existed some 1.000 years ago already. Baumberge Sandstone has been widely used during the past couple of centuries. Both, palace and dome in Münster were made from this quality of sandstone. Johann Schlaun, an architect of the baroque era, designed the town centre of Nottuln, combining the yellow sandstone with red bricks. The building works started in 1748 and the group of houses surrounding the parish church is still being used by the local government and as the town hall.

Funnily enough, once more I am living in the vicinity of a water parting. Here basically it means some streams drain into river Rhine, others into river Ems. Both rivers are navigable waters and there are a number of canals running more or less parallel to some of the rivers with locks and canal bridges. There is a waterways crossing not far from here, which is said to be the busiest stretch of water way in the whole of Europe. It is the crossing of Wesel-Datteln-Canal with Dortmund-Ems-Canal. It connects rivers Rhein and Ems with the industries in the Ruhr District and the large ports on the northwestern coastline.

Also, not far from here and still within the region of Baumberge is a little town called Havixbeck. It is the home of famous poet Annette von Droste-Hülshoff (1797-1848). Her birth house is a moated castle in a beautiful setting and houses an exhibition on the life of „The Droste“. When visiting, you will be kindly asked to choose from the felt slippers provided in all sizes in the entry hall and put them over your shoes-as a precaution to protect the old wooden flooring and carpets. 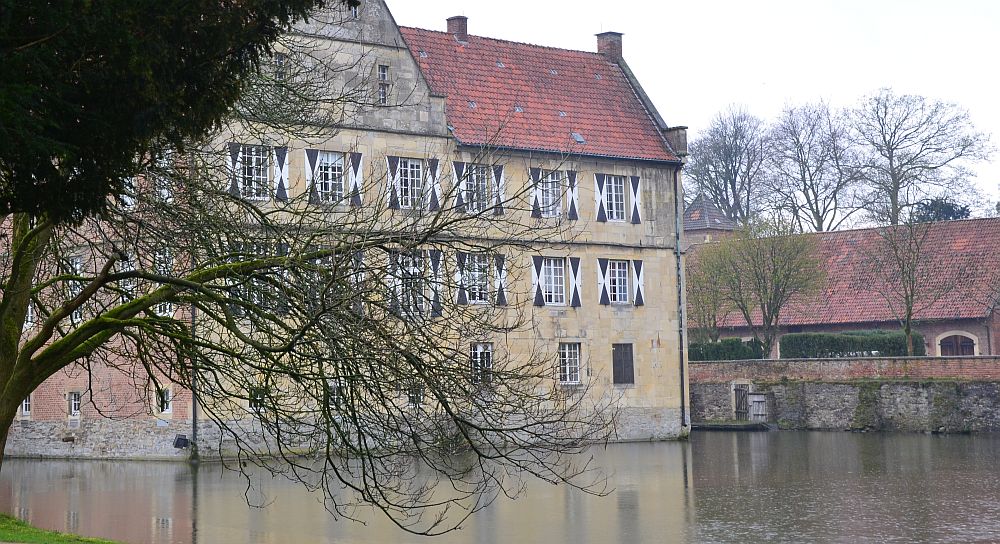 And, last but not least. There are the horses. This is a region of horses and horse riding, no doubt. But there are some very special horses here and they are roaming free on grazing land not far from the town of Dülmen. These are the famous „Dülmen Wild Horses“. It is a large group of some 300 horses basically left to themselves in a nature reserve of some 350 hectars. These horses have been kept here for centuries. They have been „Endangered Livestock Breed of the Year“ in 2014. The aim is to keep the breed as original as possible. The horses are small and very tough. Once a year a small number of young stallions will be caught by hand and auctioned. This is to keep the size of the drove fairly constant and to prevent excessive fighting between stallions once they have grown up.

As I write this, it is, apart from asparagus season, rapeseed bloom. The very specific scent of rapeseed flowers is in the air virtually everywhere. It is sunny and warm-we did have some forceful downpours a couple of days ago.

We’ll be relocating ourselves from the southwest of the country to the northwest, covering a distance of some 500 kilometres. We’ll be moving both our residence and my studio. The whole procedure will happen in several stages and take its time. Currently we are in a preliminary phase, i. e. we are packing. The flat is crammed with boxes.
Yes, we do own some books. Has anybody out there ever been moving with books?

You can follow the progress of it all here. At one point it will come to relocate all those tons of metal type and printing gear, but for the time being the studio will stay put in the south. The first step will be to move our residence. We expect the pantechnicon to come and collect our belongings by the end of April.

Today’s blogpost will fill you in about where I’ve been living those past four decades. The region is called „Schurwald“. It is a mountainous part of the most southwesterly state of Germany. „Schurwald“ is located fairly central in Baden-Wuerttemberg, east of the state’s capital Stuttgart and just north of the famous „Swabian Mountains“ or „Swabian Alb“. Looking south from the peaks of the Schurwald mountains you’ll face the impressive skyline of this geological formation known for its abundance of fossilised dinosaurs. The „Schurwald“ is a wooded area with meadows and pastures interspersed. It is all hills and slopes and valleys.

Mountain Stuifen with fog in autumn

I have moved here with my parents when I still was in primary school in the late 1960s. I spent my younger years in a small town down in the valley of a stream called „Fils“ whose waters eventually end up in the river „Rhine“ draining into the North Sea and Atlantic. This is a fact to be noted as not far from where I live you can find what is called the European Watershed and the more southerly and easterly streams and rivers will drain into the Danube and the Black Sea instead of the Atlantic Ocean. The Fils valley is densely packed with businesses many of them related to the automotive industries with the headquarters of Mercedes and Porsche in the vicinity. However, in the even smaller valleys of the Fils tributaries there can still be found charburners working in tiny hamlets.

View from derelict castle Helfenstein overlooking the town of Geislingen/Steige

Herrenbachstausee – a water reservoir frozen in 2012

When I got married I moved uphill to the village Wäschenbeuren, which is at an elevation of 442 m. Up here you do get a fair share of snow in winter. It can be pretty frosty, temperatures may plummet below minus 20 Centigrade. We’ve had seasons with such conditions lasting for days and even weeks. In February 2012 we had a period when a rush of bitterly cold arctic air froze everything rock solid for as long as two weeks. There have been considerably longer periods of cold in the not so distant past of the 1990s.

Spring is a beauty around here with all the fruit trees blossoming covering the slopes in a veil of white and a tint of pink. The soils are fairly rich and we do have lovely hedge rows with blackthorn and lilac and a great variety of shrubs and trees. There is a lot of meadows and in recent years more of them are being used as grazing land, while still many are mown. On the fields cereals are grown and of course corn and rapeseed, the latter colouring large stretches a bright yellow when in bloom.

“Schurwald” is Red Kite country. We have a good number of those impressive birds of prey living here circling the summer skies.

Basically the forests are classical beech groves with bear’s garlic and lily of the valley in spring, turning shadowy during summer with the canopy keeping the bright sunlight out. The valleys of the small streams can be very quiet and peaceful. There was a severe winter storm on Boxing Day in 1999 called „Lothar“ causing an incredible amount of rolled lumber in a vast area stretching from France right through to the eastern border of Germany. This storm hit “Schurwald” very badly.  It took the lumbermen years to deal with the damage.

Forest in 2005, six years after the big storm

With all the hedge rows and woodland autumn is almost even more beautiful than spring. The scenery will change from the dull late summer’s green into all shades of vibrant yellow to deep burgundy. With the weather being favourable this can last for weeks and is a real treat.

As I write this a spring storm lashes the streets. Gushes of rain drench any person who felt brave enough to dare to go outside, their dogs having this disgusted look on their faces for their owners having chosen to walk them in such a particularly bad weather. It is one of those cold and wet and bleak and rather unpleasant days of spring that will make your front door rattle with disagreement.